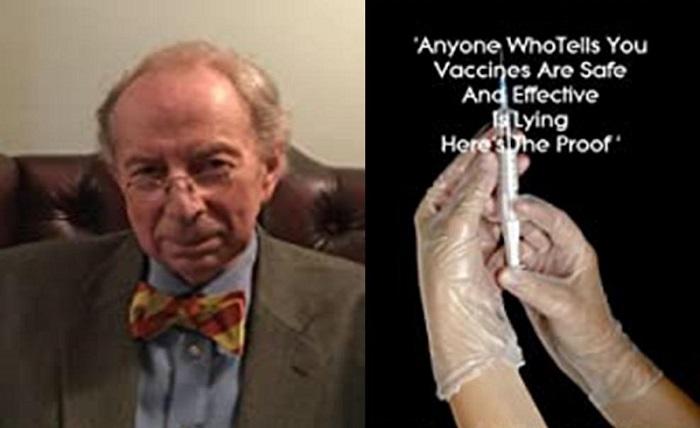 Sunday Times bestselling author Vernon Coleman, who has written over a hundred books, has been a lifelong educator. In 1983, he launched the world’s first medical software for home computers. He has written columns for many major newspapers, including The Sun and The People, and written articles for many more. He has made many TV and radio series.

Since Dr. Coleman authored the book Anyone who tells you vaccines are safe and effective is lying, I had the honor to interview Dr. Coleman in 2014 about the issue of vaccine safety and public health. The interview was published in the online paper Student Operated Press (The SOP). Since that publication has gone off the web, I am reposting this interview as the topic and Dr. Coleman’s expert opinion remain as relevant, if not more, today as it was back then.

Ernest: Dr. Coleman, I’d first like to ask why vaccination is a failed approach to disease prevention from a medical science viewpoint?

Dr. Coleman: The principle of vaccination aim of vaccination is to give the body enough exposure to a particular pathogen to encourage it to develop defense cells, but not enough of the pathogen to produce signs and symptoms of illness. Unfortunately, this is a balancing act which drug companies don’t usually get right. Some vaccines fail to work at all, some work for some people but not for others and all cause unpleasant, serious and sometimes lethal side effects. There is much that can go wrong and, alarmingly, there is absolutely no scientific evidence proving that vaccines are safe and effective. The big problem with vaccines, in my view, is the damage they do to the immune system.

Ernest: What are some of the major health risks associated with vaccines in general?

Dr. Coleman: Many doctors and nurses claim that vaccines produce no side effects. This is scary. The list of symptoms and illnesses caused by vaccines would fill a book. The biggest problem is brain damage and that is frighteningly common. People who are vaccinated may be more likely to develop allergies and, because of the damage to the immune system, more likely to develop cancer. As vaccinations have become commoner so the incidence of both cancer and allergy problems has increased. The American Government has accepted that vaccines may cause autism though supporters of vaccine programs always deny that this link exists.

Ernest: I would specifically like to ask about the polio vaccines, including the Sabin Vaccine, which is orally administered and the injectable Salk Vaccine, whether they have any significant role in reducing the incidence of polio?

Dr. Coleman: It is often said that vaccination helped eradicate polio. This is, to put it politely, a barefaced lie. In Tennessee, USA, the number of polio victims the year before vaccination became compulsory was 119. The year after vaccination was introduced the number soared to 386. In North Carolina the figures are 78 and 313. There are similar figures for other States and in the USA, as a whole, the incidence of polio increased by 50% after mass immunization was introduced. The incidence of polio had, however, fallen dramatically before the first polio vaccine was introduced. It was better sanitation, better housing, cleaner water, and more food, which led to the fall in the incidence of polio. It was social developments not medical ones which beat polio. As an aside, it is worth noting that millions who were given polio as children may now be at great risk of developing cancer.

Ernest: Who actually benefits from vaccination if not the public?

Dr. Coleman: Doctors are enthusiastic about vaccination because they make huge sums of money out of it. Doctors tell their nurses to give the jabs and they rake in the money. That’s why babies and small children are now vaccinated, vaccinated, and vaccinated again. Drug companies make billions. Doctors do pretty well too. It’s not surprising that lots of doctors want vaccination to be compulsory. In my view the evidence against vaccination is so strong that anyone who vaccinates a child (or allows one to be vaccinated) should be arrested for child abuse.

Ernest: We see an overwhelming amount of media hype about the benefits of vaccination. Would you say that mass media is outright lying to the public?

Dr. Coleman: Journalists lie about vaccination either because they’ve been bought by the drug companies (a nice dinner here, a holiday there, and a commission to write an article for the company mag for a vastly inflated fee) or because they are too lazy to do some basic research. Most simply accept what they’re told and never ask fundamental questions such as: where is the evidence that this vaccine really helps, and doesn’t do more harm than good? I am a registered and licensed GP and in my book, I challenged readers who thought I was wrong to report me to the General Medical Council (GMC), and to ask them to strike me off the medical register. The official line in the UK is to support and promote vaccines so you might think that the GMC would want me banished. But nothing has happened – because everything I’ve said is true. Vaccines are dangerous and ineffective for common use. But no one wants to air the truth.

Ernest: The question that arises from this discussion then obviously is, if not vaccination, then what? How to immunize against diseases against diseases, particularly against infectious diseases?

Dr. Coleman: Medicine these days is all about intervention. And preferably intervention that can be made profitable. The truth is we can do a great deal to protect ourselves against infectious diseases without using vaccines. Better food (and less of it), fresher air, and clean water are all essential. And we would be healthier without vaccines and so many hazardous drugs. The billions spent on vaccines (and on secretly paying millions in compensation to the parents of vaccine-damaged children) would be much better spent on educating people about healthy eating – and controlling the advertising of burgers and other deadly foods.

Ernest: What are the indicators people should watch for in order to recognize that their immunity or that of their children or family is going down?

Dr. Coleman: Children (or adults) who seem frail and susceptible to infections and allergies may well have damaged immune systems. And it’s vaccines which we can blame for that. Children today are sicker than ever before. The incidence of disorders such as asthma is rocketing. Stop the vaccine programs and children will be much healthier.

Ernest: As a medical doctor, do you think it’s realistic to expect cent percent eradication of a disease from any population without vaccination or any artificial means of immunization?

Ernest: I would also like to learn what has been the response o reaction of the mainstream medical community to your book.

Dr. Coleman: The medical profession refuses even to debate the issue of vaccination. No TV station will dare have a public discussion. Although I have sold over two million hardback and paperback books in the UK, and my books have regularly been in the bestseller lists, my book on vaccines, Anyone who tells you vaccines are safe and effective is lying. Here’s the proof, was banned by the media. There was not one review even though 500 review copies were sent out. No American publisher would risk printing a version for the USA. And I’ve been prevented from talking about the contents. The ban on the truth about vaccines is global. When I wrote an article on vaccination for a Chinese newspaper, the Chinese Government banned my books (which were widely available in China) and banned Chinese publishers from publishing any more of my work.

Ernest: Dr. Coleman thank you very much for taking your precious time to share your expertise here.

Dr. Coleman: Thank you for having the courage to air a topic which is widely, and aggressively, ignored.