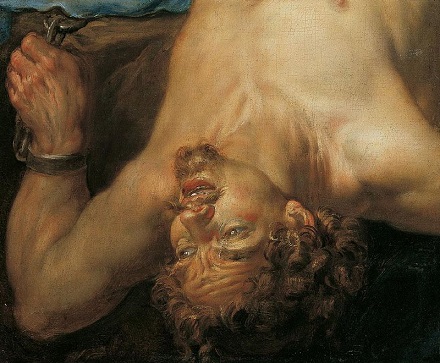 “LIVE spelled backwards is EVIL”, says the publicity tag of the movie The Spring (David Jackson, 2000). Now that sounds witty, probably even ridiculous. The movie is somewhat slack, though a freelance writer for a protagonist is something that would make me watch it with interest (and “Dale Cooper” Kyle MacLachlan of Twin Peaks fame). But the connection made in the attention-grabber does invite thought.

We could view it in the story—myth, if you will—of creation. In ancient Greece, four basic elements of creation were known: air, earth, water, and fire. When Zeus, the king of gods, became angry with man, he took away fire from him. Prometheus, one of the Titans, sided with the human race. He stole fire from the heaven and gave it to man, earning the wrath of Zeus who chained and tortured Prometheus. Fire thus signified the cause of god’s wrath—a curse associated with rebellion and evil.

Monotheistic traditions seem to have borrowed from the Greek myth and, with some tailoring, create their own story of rebellion and evil. Interestingly, fire takes a key role in this narrative too. When God created man and ordered all angels to bow before him. One angel, who would afterward be known as Satan, refused to follow this order, arguing that he was superior to man for he was made of fire while man was created from dust (mud or clay). Satan was thrown out of heaven for this disobedience. Sometime after that man too was expelled from heaven for the original sin—and that too was an act of disobedience, though more by lack of smartness than active, intentional, and willful disobedience.

The common denominator between man, the superior form of life, and Satan, or fire, is thus disobedience in the story of creation. The element of fire will henceforth constantly play as a challenge in man’s life and, subsequently, afterlife. Since fire—as Satan—is eternally damned, man can hope for salvation by shunning the fire of his ambition, his lust, and temptation to steer away from the divine law. Man has been given a life to beat Satan, to beat the fire, and win back his lost heaven. Now here comes the irony of the game—man’s life itself is dependent on fire, directly or otherwise.

Leave it to science or everyday observation, life’s machinery is all run by the fuel of heat, another form of fire or, to say, the essence of fire. From plate tectonics to photosynthesis and daily cooking and transportation, to the metabolism (burning of energy-carrying stuff), fire is the fuel of humanity. Thanks to Prometheus, we live by the devil! Sounds familiar?

So is life essentially evil? Is it a paradoxical scheme where light may mean darkness in disguise, hope may refer to despair, and good is another expression for bad? Well, not necessarily for we see these as opposites. But still the conflict is obvious—between light and darkness, good and bad, hope and despair, and perhaps between life and evil.

By not so far stretched corollary, this paradox implies beating the fire equals salvation for man. Beating the fire surely wouldn’t imply doing away with it—something that hardly the human race is capable of—but use it to one’s best conceivable need. I can’t seem to think of anything better than using the fire to light one’s soul and keep it warm and bright. Perhaps that is the only way to beat the fire without getting burnt.

Our movie’s tag tells us that LIVE spelled backwards is EVIL. But we don’t have to spell the word backward. Or do we?