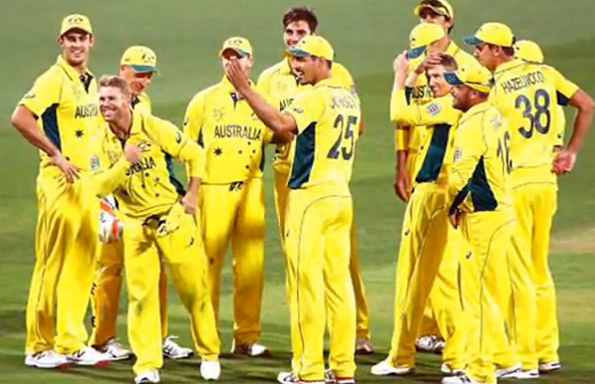 After crushing Pakistan in the quarter final, Australians showed India the door out of the World Cup Cricket tournament by a decisive defeat in yesterday’s semi-final in Sydney. Australia beat India by 95 runs.

The Aussies dominated the match since the beginning. Winning the toss and batting fist, they kept a good average run rate of close to 6 and raising it to 6.6 near the end of the match. Steven Smith scored a heroic 105 off 93 balls with Araon Finch making 81 off 116 balls.

As happens with the Australian side, with fall of wicket their sporting spirit starts soaring. It was Mitchell Johnson who took the batting to a sensational climax near the end of the Australian inning with his stormy 27 off 9 balls, including 3 successive fours and a sixer. The Aussie wrapped up their batting inning with a total of 328 runs for the loss of 7 wickets.

Fox Sports gave live scores online showing India starting with a fairly okay run rate but bending soon to its knees as they lost wickets one after the other with Mitchell Johnson claiming two important wickets, including that of the key Indian opener Rohit Sharma and the middle-order batsman Virat Kohli. India were all out at 233 in the 47th over of their inning. Steven Smith was adjudged man of the match – for his overpowering century.

Australia has proven itself as the master of one-day international cricket with four world cup titles won to their credit – the most of all teams in the cricket history. It’s their chance now for a 5th world cup title. So now they are meeting their neighbors – the Kiwis – New Zealand in the final in Melbourne on 29th March.