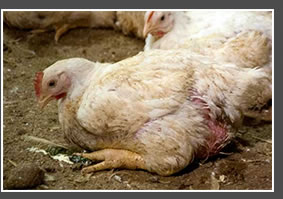 Chicken are one of the worst – in not the worst – sufferers of human cruelty. One of those unfortunate animals labeled as

food in many cultures around the world, the lives of chicken have been commodified to make one of the leading food industries in the world. And their non-stop slaughter follows their miserable lives in the most miserable conditions – cooped up in constricting, narrow cages until killed.

As the National Chicken Council (NCC) will soon be releasing new guidelines for chicken welfare, the American Society for Prevention of Cruelty to Animals (ASPCA) has been asking for urging the NCC for reforms in chicken-raising, putting welfare of the animals first. The ASPCA’s petition notes that NCC can “entire industry in the right direction—but they won’t do it unless the public demands it.”

The letter of the petition reads: “…today’s quick-growing breeds, overcrowded sheds, and dirty conditions are bad for chickens and consumers. It’s time to stop putting profits ahead of welfare.”

The petition has received more than 24 thousand signatures and needs another at least 800 names by November 18.