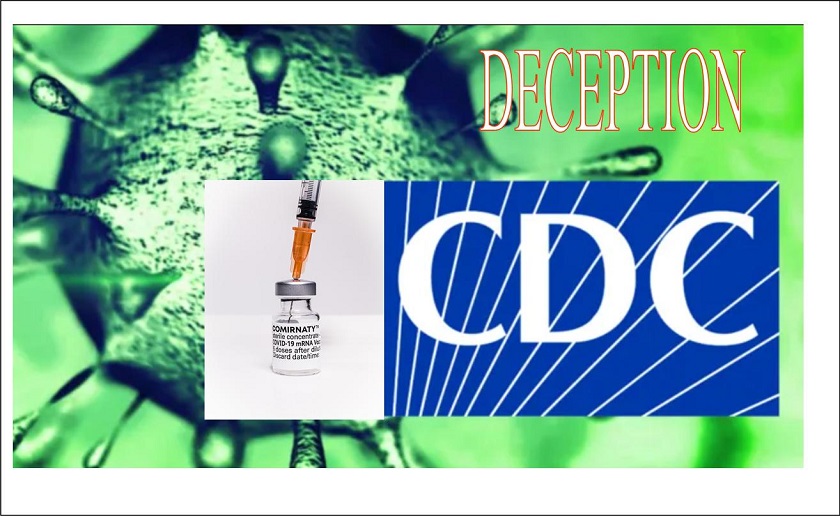 Medical Xpress and other media outlets published stories with headlines like “Study shows effectiveness of COVID vaccine against ICU stays” citing a new CDC study that came out last month. Like the many other vaccine-promoting studies, this one turns out to be nothing more than mock-science that lacks credibility and real scientific value. Let’s take a look at what the details of the study show.

Published in The New England Journal of Medicine under the title “Effectiveness of BNT162b2 Vaccine against Critical COVID-19 in Adolescents” on January 12, 2022, the study funded and overseen by the CDC claims it looked at hundreds of vaccinated and unvaccinated patients of age 12 to 18 years in 23 different states in America.

Between July 1 and October 25, 2021, we screened admission logs for eligible case patients with laboratory-confirmed COVID-19 at 31 hospitals in 23 states.

Why These Hospitals and These States?

This is where the first, and a quite important, question arises regarding the data collection: why these particular states and why these particular hospitals were selected by the researchers for collecting data? Wouldn’t it make more sense to have a nationwide study? The only mention of gathering data from these hospitals in the study says that these are part of “CDC-funded Overcoming Covid-19 Network” (Methodology/ Enrollment of Case Patients and Controls).

Bear this question mind and let’s get to this point later in this analysis.

Vaccination Status and Exclusion of Patients from Study

This part of the study’s methodology contains one of the two most important and suspicious sides that undermine the study’s credibility (the other being Conflict of Interest). So how were the patients categorized and who was excluded from the study – and why? This screenshot from the study documents the point. 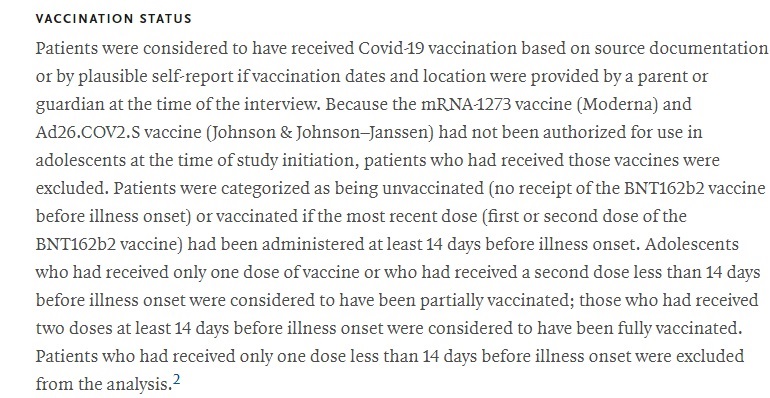 Multiple deceptive manipulations are visible. Patients who had received only one dose less than 14 days before illness onset were excluded from the analysis. Why? Because CDC (the medical establishment in general) does not want to admit vaccine failure in preventing COVID and has arbitrarily decided to wait for 2 weeks after a vaccine dose before studying a patient who got one shot of a COVID vaccine. Interestingly, 2 weeks is the time when most COVID-infected patients heal on their own or with usual remedies with most making a full recovery in 2 weeks (webmd).

So it’s a clever trick the vaccine-advocating medical establishment plays on people—because in 2 weeks, most people will get better by their natural immunity, and vaccine advocates will claim that it was the vaccine that did the job in 2 weeks. Also, they want people to not see a correlation between taking a COVID shot and developing COVID-like symptoms – after all, there are many people with intact common sense, who will ask why this sickness starting soon after the shot. So the patients are removed entirely from a study like this to avoid drawing attention/suspicion.

There is a curious part of the excluded patients who had Moderna or Johnson & Johnson shot because, as the study tries to justify, these vaccines had not been approved for use in adolescents. That hardly makes any sense. If the vaccines were not authorized to be administered to these young patients, why were they given to them? Wouldn’t that be illegal and unethical (not that the medical mafia cares for any of these factors though)?

More patients excluded from the study are documented further down in the paper (Results /Characteristics of the Participants). 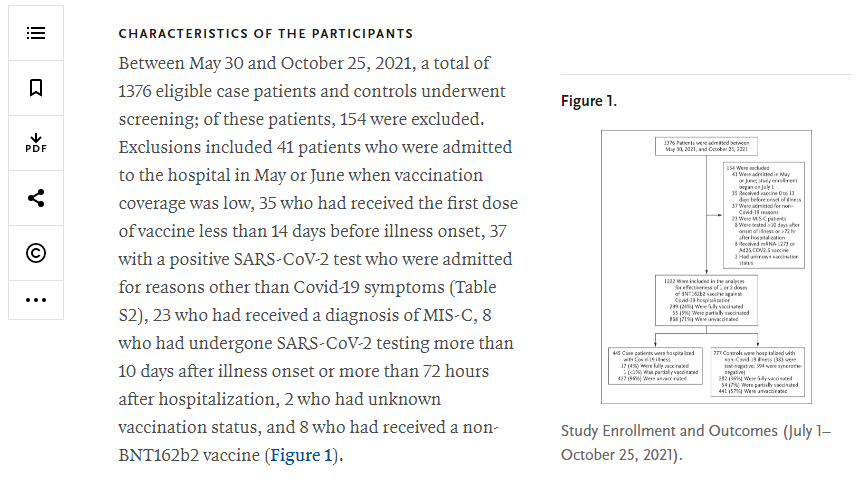 As one can see, a good 154 patients were excluded from the study. 41 of them were excluded because they were “admitted to the hospital in May or June when vaccination coverage was low.” Wait! Excluded because vaccination coverage in the population was low? What kind of an excuse is that really? There is no science or logic to explain such a rationale. One may well suspect that these were vaccinated patients and very sick but including them could undermine the desired results of the CDC study so they were simply removed – like a bad witness that can ruin one’s case is dropped from the witness list.

Next, 35 who had received the first dose of vaccine less than 14 days before illness onset were excluded to the convenience of the pro-vaccine data collectors. This vaccine-serving exclusion helped lower the number of vaccinated patients requiring hospitalization.

Another 8 patients were removed from the study because they had undergone COVID testing more than 10 days after illness onset or more than 72 hours after hospitalization. Again, why? They were as much COVID patients as any other included in the study. There is no info on the vaccination status of these as well. Should we not suspect that they were vaccinated and their removal under this odd excuse would serve the desired outcome of the study?

After skewing the proportion of vaccinated versus unvaccinated patients in the study by selective exclusions, the study does what similar studies serving the vaccine industry have been doing: conveniently conclude that because there is a lower number of vaccinated patients admitted to these select hospitals, it proves the vaccine has been effective in preventing COVID hospitalization. This is not scientifically valid and at best presents a claim of correlation. Correlation is not causation – meaning it does not prove that it was specifically due to the Pfizer vaccine that there was count of vaccinated patients admitted to the hospital. One has to repeat (replicate) the experiments a number of time and come u with the same results at various facilities before accepting any causal relation between vaccination and prevention of hospitalization among the same age group.

Interestingly, the study seems to admit this unscientific assumption of theirs in the Discussion section acknowledging the study’s limitations.

Findings from urban health centers in this study may not be generalizable to patients with less severe disease who may present at nonurban hospitals.

Wait! The study is admitting that what it found may not be what researchers will find when they try to research vaccine effectiveness in patients in non-urban hospitals. Why? Research that is not replicable elsewhere is not considered independently verifiable, and hence not reliable.

At multiple places in the study, the authors mention 7 deaths among patients in the study that were admitted to the ICU.

All 7 deaths occurred in patients who were unvaccinated.

Without saying more, the study leaves it there. The intended implication is simple and easily tricks the simple-minded reader into concluding that if only you are unvaccinated, COVID can kill you. What the study does not add to this specification of 7 deaths among the unvaccinated in ICU is that all of them had other deadly diseases or serious health conditions that possibly caused their death. Table S3 of the Supplementary Appendix document (p. 7) lists the multiple serious and life-threatening health issues the dead patients had including chronic diseases of kidney, liver, blood, respiratory, cardiovascular, and immune system. 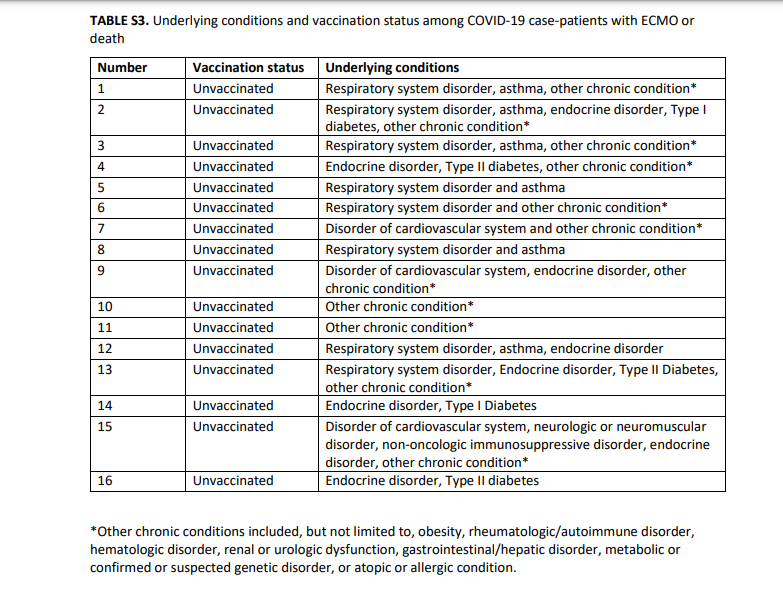 There is no evidence presented by the study that these children died because of COVID. There is no autopsy report for the dead shared or cited in the study showing the same. The study’s reference to their unvaccinated status is entirely irrelevant to the question of efficacy of the Pfizer vaccine.

In short, yes – a huge conflict of interest. The CDC oversaw this study and funded it. The funding statement (Conclusion) reads:

Funded by the Centers for Disease Control and Prevention.

The study also mentions that the 31 hospitals that provided the patient data are part of the CDC-funded Overcoming COVID-19 Network. For those who still don’t know, the CDC directly gets its funds from the federal government and the federal government via the US patent number 10,960,070 (better known as the ’070 patent). It earns directly from the vaccine sale. CDC, NIH, and Pfizer are the three arms of the same corporate animal that spews out vaccines.

But that is not all. The vaccine manufacturers also separately funded the individual researchers who authored this study and donate to (fund) at least some of the hospitals participating in the study. The details of the conflict of interest of all involved in this study will be shown in a video to be included here on completion. (So keep watching this article’s end for an update with the video.)

The Credibility of the CDC Study

There is none. This study is amounts to an act of deception of those who are unsuspecting, are not educated in science specifically, and do not read or cannot research papers. It’s not to belittle them or hate them for being uninformed in this area. They are the victims of misinformation by sources they trust.