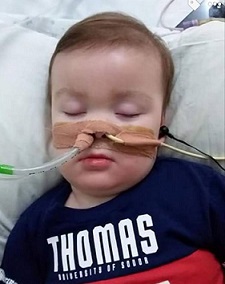 Update (April 28, 2018) – Alfie Evans died early this morning at the Liverpool hospital that kept him captive. His supporters, including this blogger, call it brutal and reckless murder by the neo-Nazi British empire.

The criminal medical establishment in the United Kingdom is starving an ill child to death while the country’s clown courts have ordered the child’s parents not to try move the child away from the criminal siege.

Yes, I am talking about Alfie Evans, the child in coma whose reckless abduction and siege by the authorities have opened the world’s eyes to how things work in the empire where the sun never sets, or so they bragged.

It’s been over 24 hours now that little Alfie, held hostage by a hospital in Liverpool with state backing, is fighting death as his life support was removed the other day. While the child received blessings of the Pope and Italy has granted citizenship to him with a plane ready to take him to Italy for possible treatment, parents have been banned by the court to take the child out of the country.

From destroying the world to turning on its children, the ravages of the British empire can hardly be overstated. And I say British empire here specifically because that is how the royal courts and neo-colonial medical establishment of the country have proven themselves to be in Alfie’s case. His is the hostage of a parasitic entity that has abducted him in broad daylight and ordered his execution via the medical mafia.

The leftist propaganda mobs – active under the misnomer of mainstream media – have overtly sided with the establishment that is determined to kill Alfie. Of course, these propaganda cartels cater to the political needs of the establishment as they are, in the broad sense, components of the same tyrannical system. No wonder then that these cartels are supporting the establishment’s royal verdict of Alfie’s execution via starvation. Remember how different things were when Syrian baby Alan Kurdi was killed by the criminal negligence of his father who tried to illegally smuggle him to the west in a boat?

But Conservative media is sympathetic toward Alfie and his right to be taken abroad for life-saving treatment—that much credit must be given to the voices supportive of him as against the leftist neo-Nazi establishment media.

Alfie is a soldier. He continues to breathe, even opened his eyes briefly and moved his arm, after life support was discontinued to kill him. This single act of breathing, this clinging onto life despite the worst shenanigans of his enemies to end his story, stands in the way of the murderers.

That Alfie is supported by hundreds of thousands, perhaps million, across the world is obvious in the social media postings. The Facebook page Save Alfie Evans has over 114 thousand Likes thus far. People have been protesting outside the hospital in Liverpool where Alfie rests in his long sleep with endless hope and non-stop prayers for his waking up.

Will the child win against the British empire? I say he already has won as through him we have seen the dark and evil face of this government-medicine-media alliance.

We love Alfie, just like we love Prince William’s newborn son. But the establishment treats them differently. One is a celebrity, the other sentenced to death. And that is where British empire stands today.