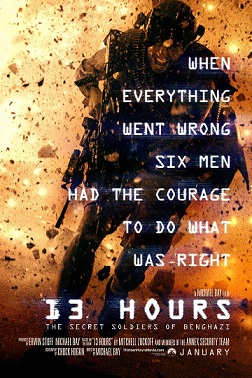 “I called for assistance. It never arrived!”

It’s an intense film with lots of gun fight, great cinematography, and a gripping depiction of six American soldiers who saved the lives of many countrymen during the infamous Benghazi attacks of September 2012. The darkest side of this trial depicted in the film of course is the abandonment of the fighters by their own government.

Before the theatrical premier, Variety already had noted that there is no mention of Hillary Clinton or Obama in the film. Perhaps that was smart on part of director Michael Bay to make it less partisan and more neutral as a filmmaker and still show what happened in Benghazi that terrifying night when the special US diplomatic mission’s building came under attack by Islamist militants.

As one would expect, there is lots of gun fight and violent imagery in the film – pretty strong on the adrenaline side. The car-chase sequence and that showing the Ambassador’s team caging themselves in to hide from the militants are bone-chilling. Understandably that is also integral to the film’s story and visual appeal. In a patriotic way, it would be quite inspirational.

The real thing though are the scenes where the soldiers are shown disobeying the admin orders to act on their own in defense of the troubled Americans in the compound under attack. And, as the film shows, they fail because of not getting early permission because their admin chief – speaking on phone for long – would say “no” to their call for departure.

For the deaths American casualties in Benghazi that night, US senator and 2016 presidential runner Hillary Clinton – then Secretary of State – is still under congressional and FBI investigation.

On a side note, despite being the premier night, the theater at Orlando Fashion Square seemed to have made the film the least invisible – no name of film running on the screen, no posters, nothing. The sole poster of the film was tucked behind two other posters so that it was barely visible. Apparently the theater didn’t care about the film as it does about others.