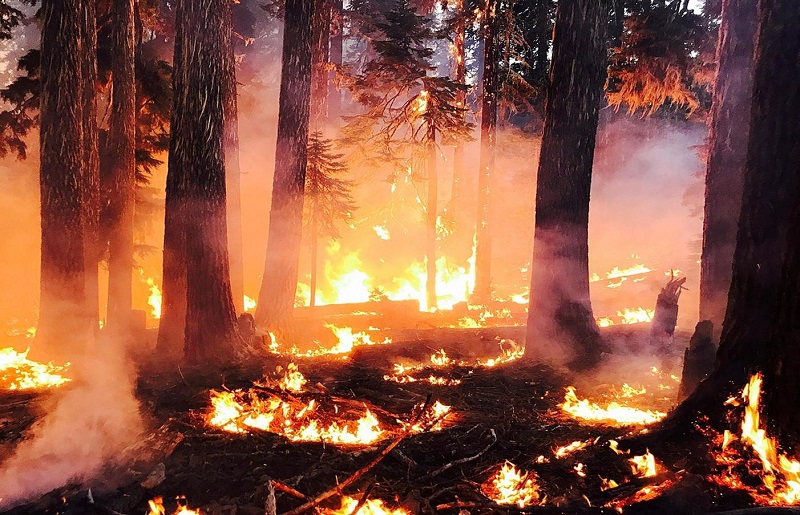 The west coast states in America are full of smoke and fire due to burning forests and despite multiple sources of reliable evidence showing deliberate man-made fires set to the woods by liberals, the liberal politicians and media are calling them “wildfires” caused by climate change.

Authorities in Oregon have confirmed the man-made nature of the fires as Multnomah County Sheriff, Mike Reese, posted a video statement on Twitter confirming that a fire was started in the Corbett area using illegal firearms. He also reminded the huge fire started in 2017 by a teenage boy leading to destruction of 50 thousand acres of land with vegetation.

Hi statement reveals just the tip of the iceberg as multiple other sources reveal people starting fires in what appears to be a coordinated plan of arsons. Though the liberal terrorist organization ANTIFA is the prime suspect in these arsons, Portland FBI has reportedly stated they believe extremists are not responsible for the arsons. Washington-based independent journalist Katie Daviscourt disagrees with the FBI.

There is not enough evidence to confirm that Antifa is setting the PNW on Fire. But there is enough evidence to confirm there are coordinated arsons. FBI Portland is wrong when they say extremists aren’t setting fires. ARSONISTS ARE EXTREMISTS!” wrote Daviscourt in a tweet. She also posted a video of an armed Oregon woman who confronted a suspected arsonist and called the police on the suspect who is shown surrendered on ground as the armed woman stands guard.

OREGON—Woman holds suspected arsonist at gun-point after catching him with matches on her property. #ArsonExposed pic.twitter.com/OGl1lsSAqU

Oregon-based independent journalist Andy Ngo tweeted the details of the arrest of a 45 year old Domingo Lopez Jr. who was arrested by the East Portland Police for starting a bushfire using a Molotov cocktail. But he was quickly released without bail.

On September 11, Daviscourt posted about the arrest of an arsonist, Ignat Shchetinin, in Clackamas County.

Fox News reported on Sunday that two men in Washington and one woman in California have also been arrested for arson and are facing charges. On September 2nd, The Oregonian reported the arrest of a 44 year old man, Elias Newton Pendergrass, in Eugene for  setting fire to a wooded area covering 382 acres.

Despite the mainstream media’s denial of political affiliation, it is clear to the aware public that liberals are behind these fires and a segment of the police, for example the East Portland Police, is actively facilitating the arsonists by releasing them, with or without bail. Keeping the states on fire helps the liberals make claims about the debunked climate change emergency propagated by globalists. It also helps perpetuate the state f emergency and chaos that liberals want to keep going in America as Trump’s 2020 reelection victory looms over their web of political conspiracies against him.

Related: Arson arrests made across the west coast as fires rage on