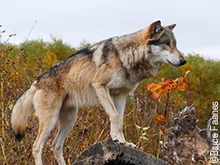 “Thanks to the efforts of many, a revolting piece of anti-wolf propaganda is now off the air’” reads an email message from Defenders of Wildlife (DOW) about a recent victory for advocates of wolves’ population in US.

The message referred to a recent show on Animal Planet called Mean-Eating Super Wolves that stirred a public outcry against the show and the channel’s attempt to demonize wolves. According to DOW message, 80,000 plus wolf-supporters sent Animal Planet letters of outrage for airing the show that was posing as a “documentary”.

Owing to wide public outrage against the show, Animal Planet has canceled at least four re-airings of the anti-wolf show and instead put something friendly about wolves on their website:

The organization thanked all supporters for speaking up for wolves and is celebrating the victory along with other animal rights advocates.