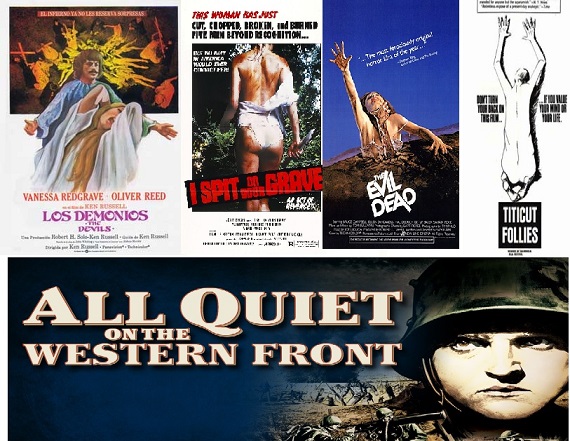 Since the early days of film production, there have been many films that caused a lot of controversy amongst the leaders of several countries around the world. Such films were banned for the sake of protecting the general public from certain immoralities, as it were.

Many movie censors in Germany, Norway, Finland, Iceland, New Zealand and Australia have banned all violent horror movies, and continue to do so. These critics tolerate movies of a sexual nature, but movies with a greater degree of high impact violence are harshly scrutinized. Although British censorship of films was the toughest in the western world, they have become more laid back where movies are concerned. Here are five of the most shocking movies that were ever banned, and why.

1. All Quiet on the Western Front (1930). This film was banned in France, Germany, and Italy. Although this movie depicted the horrors that soldiers faced during World War I, the Nazis hated this American film, so they would detonate stink bombs and release mice inside the theaters. Once the Nazis became powerful in Germany during WWII, the movie was banned through the 1930s and 40s. The film was banned in Austria from 1931 up until the 1980s. France, Italy and Australia banned the movie until 1963.

2. The Evil Dead (1981). The Evil Dead was banned in Singapore, Finland, UK, Iceland, Germany and Ireland. This movie was one of the greatest all-time horror films, and was known as the number one nasty. This film was chopped and edited until a version was released that made Mary White house and her Morality Campaigners happy. A little side note, the UK ban boosted sales even more than the film originally generated when it was first released.

3. I Spit on Your Grave (1978). This is a rape-revenge thriller that was also marketed under the title Day of the Woman. It was banned worldwide immediately after i’s release, because of its bathtub seduction scene.

4. Titicut Follies (1967). This documentary, surprisingly, was not banned based on controversial scenes containing sexual, political, or horrific content. Frederick Wiseman’s revealing look inside a Massachusetts institution for the criminally insane was so incredibly disturbing that the state tried to bury it indefinitely. The authorities placed a public ban on the film, which was lifted in 1991