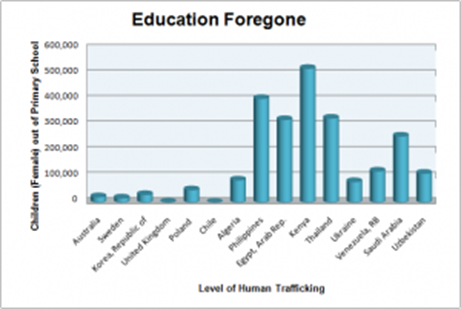 “Slavery is defined as one being forced to work through fraud or threat of violence for no money beyond subsistence. It is more commonly known by the newly adopted term human trafficking. Current research indicates that there are between 12.3 and 27 million slaves worldwide. To put this in perspective, that number represents roughly 1 in every 350 global citizens. It happens in every state in the US and every country in the world. It’s worse now than at any time in human history.” ……… Imagine Foundation.

An interview with Jesse Bach, a 35 year-old teacher from Cleveland, Ohio, offers a glimpse into Imagine’s origins and goals and how it has helped educate people about the slavery of human trafficking and to expose its evils.

Michell: Please share with us how the Imagine Foundation got started.

Jesse Bach: Years ago I had the opportunity to travel to Cuba on an educational research trip. One evening, I left our handlers and went into the slums of Havana. I saw children being sold for sex. That event profoundly affected me leading me to Kathmandu, Nepal where I worked with children rescued from the KamLari system (which is a form of indigenous human trafficking). I returned home and needed to continue to work but found that very few organizations were actually doing anything to end human trafficking, thus began our Imagine Foundation.

Michell: Outside of educating people about human trafficking, how do you help people?

Jesse Bach: We target areas known for prostitution and sex trafficking and distribute literature intended for the victim/survivor to call for help. Additionally, we provide federal law enforcement with “survivor bags” which contain a month of life essentials for individuals rescued from trafficking

Michell: How many people work for the organization?

Jesse Bach: We currently have no employees, everyone is volunteers but we do have about 10 very committed volunteers.

Michell: What is project safe?

Jesse Bach: Project SAFE stands for Saving Adolescents from Exploitation, it is an educational program aimed towards high school students to teach them how to be safe from predators, how to be an ethical consumer which helps to alleviate global forced labor.

Michell: The back page report is a very important document for people to read and learn from. How long did it take to gain these facts? Please share with us one factual statistic that you feel the public should be aware of.

Jesse Bach: The Cleveland Backpage report took 3 months to gather the data. Since the publication of it, we have gathered data on several cities in Iowa and have just completed data capture in Cincinnati as well. One fact that people should be aware of is that most data implicates fairly affluent suburban areas rather than urban. This makes sense when we think about the financial aspects. If someone is being sold for a considerable sum, where and whom has the money to do that?

Michell: What is the best advice you can give a person today either in the sex slave trade or anyone who is associated to someone who is.

Jesse Bach: We don’t really call it the sex slave trade, that really dehumanizes the individuals caught up in the system. We identify them as trafficking victim/survivors. But the best advice is to leave it, and ask for help. Often times the victim/survivor has been conditioned to think that they are property and that no one cares. There are many who will help and who care.

Michell: Can you help us to understand what how to know if someone is a human trafficking boss that abuses people through sex slave or labor slavery? How can we report them? Does it really make a difference?

Jesse Bach: If you suspect human trafficking, there is usually good reason for it. Here are a few indicators:

If you suspect something, report it to local police and the National Human Trafficking Resource Center at 1.888.373.7888. This does make a difference, trafficking rings are broken up and individuals are rescued all the time from anonymous tips.

Michell: Do you think people care less about people in underdeveloped countries where this is taking place? How do the persons in these places get help?

Jesse Bach: I would say that there is more awareness and caring about human trafficking in developing countries. I see large sums of money being sent overseas with legions of volunteers where we have great difficulty even getting volunteers to distribute information for domestic issues. Overseas there are numerous organizations working for anti-trafficking efforts. One Nepali organization has beds for 140 children in their home. The United States has less than 100 beds for rescued survivors.

Michell: Please share with us what some of your long term goals are for the organization.

Jesse Bach: Our long term goal is to equip people and empower them to end all forms of exploitation. We are also planning The Cleveland Freedom Center. It will be a first of its kind human trafficking prevention and treatment facility for those who are involved in the system and those who are at-risk of falling into trafficking. We will equip the survivor and the at-risk with the counseling, education, and individual empowerment skills so that they get a second chance at life.

Read the Back Page Report at http://imaginefreedom.org/wp-content/uploads/2011/09/backpage_report.pdf.