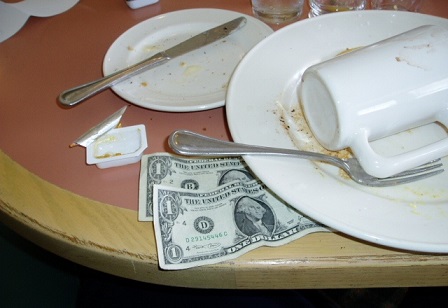 Tipping is a very important custom in this country. Many waiters and waitresses try very hard for the money they make, and as far as I’m concerned, tipping is an expression of appreciation.

While many people tip according to old-school protocol, such as an additional 15% of the entire bill, I tip based on performance. If a waitress provides me with quality service, my tip is a lot greater than if she has a bad personality or doesn’t know what’s going on. Through this method of tipping, I expect that the waitress will have more of an incentive to get a larger tip if she tries harder.

On the other hand, there are restaurants that include the tip as part of the bill, taking the decision away from the customer. This is no problem for me, because I am not forced to tip a waitress who underperforms. The restaurant does it for me.

I have a lot of first-hand knowledge of how a waitress reacts to a tip because I’ve been dining out for decades. I’ve seen it all. I remember when a waitress complained to her boss because she expected a bigger tip from me and a few of my friends during a birthday party. On the other hand, I’ve also witnessed waitresses who jump for unexpected joy over the size of their tips. I don’t know when this particular culture began, but it’s a good one.

I can’t finish this column without relaying a true story that my father told me which puts the entire tipping process into perspective. From what I remember, my father was dining out with friends and had a bad waitress. After the meal, one of the men gave her a penny as a tip. You might ask why he bothered to give her a penny instead of not tipping her at all. Well, it might be assumed that if he left her nothing, it was an act of forgetfulness. Giving her a penny signified that he didn’t forget how poorly she treated him. It sent a clear message.