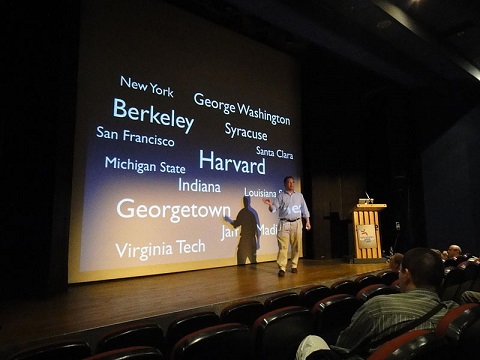 Have you ever tried to listen to a presentation, a movie, or anything else that interests you, only to be surrounded by people who would rather talk? It’s frustrating, isn’t it?

Being blind, I rely on my hearing. I would assume that people with vision rely on their hearing as well, but I am now going to tell you about an incident which proves how some people take their vision for granted.

Recently, I was at a banquet where the organizers gave a one-hour presentation about what they do. I expected it to be a very touching presentation, similar to many others that I heard over the years. I was sitting far away from the stage at a round table, which accommodated eight to ten people. My friend and I tried to be extremely quiet, but most of the other people at the table were talking over the presentation. It got to the point where I couldn’t hear most of it. My friend and I tried to politely ask the others to keep their voices down, but we were unsuccessful.

To make a long story short, we finally found out why there was so much chatter at my table during the presentation. Apparently these people couldn’t see the stage. Being a blind person, I couldn’t see the stage either, but guess what, I still wanted to hear what the presenters were talking about. So, even though the sighted people at my table had the same problem that I had, why did they have to talk? This is why I believe that vision is often taken for granted. If a sighted person can’t see something, it’s often disregarded. In this case, they couldn’t see the stage, and it didn’t matter to them who was speaking on the stage. They needed to see who it was before they paid attention.

What can we do about this problem?