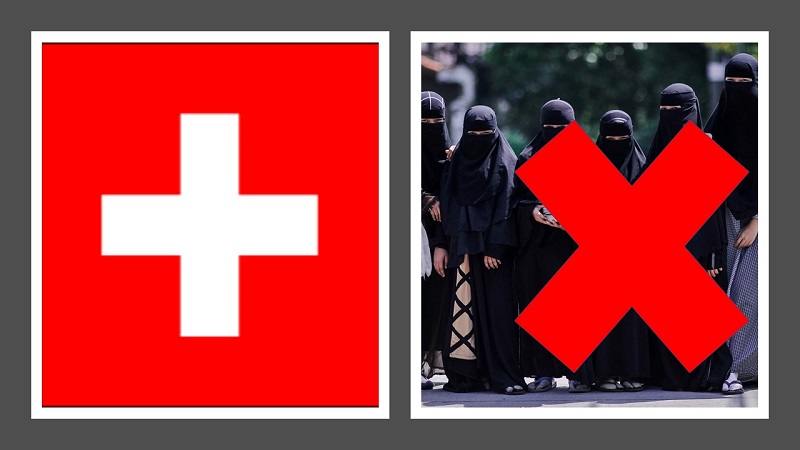 With the rising threat of Islamism to the western world societies, measures are seen taken in various countries to counter the Islamic cultural practices in public. In the latest measures of this kind, Switzerland has approved a ban on face covering seemingly to prevent Muslim women from exercising their religious obligation to cover faces in public.

The New York Post reported that the measure was narrowly approved in vote by the Swiss government today and will ban covering face in public places like restaurants, sports arenas, and public transportation etc.

National legislation will put Switzerland in line with countries such as Belgium and France that have already enacted similar measures.

1n 2018, Denmark banned burqa, a full body and face covering worn by many Muslim women when going out in public. Violators have been fined since and Muslims as well as liberals sympathetic to the Islamist ideology and culture of Muslim immigrants are unhappy with the Danish government over taking away the right of Muslim women to dress as they choose.

The liberal defense of the right of Muslim women to wear face coverings is interesting since such covering practice stems from teachings considered oppressive to Muslims women by many liberals when women exercise it in the Islamic world. Yet, when they bring that culture to the west, liberals shift their position and consider the opposition face covering offensive.

But the ban on face covering is not only cultural. It also relates public safety and national security. There have been incidents of female Islamic terrorists who used face and body coverings to facilitate their terror attacks or get away with crimes since face covering makes identification difficult, an important factor winning in the court of law. Sri Lanka banned face coverings in 2019, a week after the deadly Islamic terrorist bombings on Easter that left 253 killed.

However, the ban on face covering in the west falls pale in comparison to the most fierce and draconian suppression of Muslims in China. Muslims in China are not allowed to practice their religious rituals s taught in traditional Islam. Instead, they are forced to adjust their Islamic ways to the Chinese culture. The Chinese government treats Muslims as suspects and potential threat to Chinese society and national unity as defined by the Chinese Communist Party.