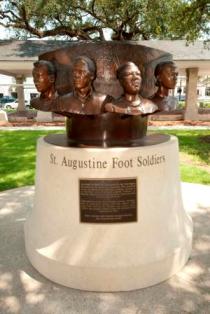 St. Augustine, FL – July 2, 2014 marks the 50th anniversary of the Civil Rights Act of 1964. To honor this landmark legislation in America’s history, the City of St. Augustine and St. Augustine 450th Commemoration are hosting an official ceremony at the Plaza de la Constitución at 3:30 p.m. The event is free and open to the public.

The event will begin with opening remarks by City of St. Augustine Mayor Joseph Boles. Guest speakers include 2014 Commemoration Advisory Council Chairman Thomas Jackson, Reverend Thomas DeSue, who was the pastor of St. Paul African Methodist Episcopal Church in 1968, and Father Tom Willis of The Cathedral Basilica of St. Augustine. The event will also include the presentation of a proclamation honoring the day as well as a laying of the wreath on the Foot Soldiers Monument by Barbara Vickers, 2014 Commemoration Advisory Council member, Foot Soldiers Monument coordinator and civil rights veteran. Madeline Holtz, Carol Holtz and Dorothy Edwards of the 1964 Mt. Zion African Methodist Episcopal Church choir will sing “Ain’t Gonna Let Nobody Turn Me Around.” Nearby church bells will ring to conclude the event.

“On this day, we will honor those who took part in the important marches and demonstrations of the civil rights movement, causing the world to take notice,” said Dana Ste.Claire, director of the St. Augustine 450th Commemoration. “The courageous actions of those 50 years ago in St. Augustine were a catalyst of the passage of the Civil Rights Act.”

The Foot Soldiers Monument is the site of the ceremony due to its significance. The monument was created in 2011 under the direction of Vickers as a remembrance of the people who took part in peaceful protests in St. Augustine during the civil rights movement. The monument is comprised of four life-size portraits that represent a demographic profile of those involved in the movement. The wreath to be placed on the monument is a donation from the Poinsettia Circle of the Garden Club of St. Augustine.

The Civil Rights Act was signed into law by President Lyndon B. Johnson on July 2, 1964. The act banned discrimination based on race, color, religion, sex or national origin. It protected voting rights, banned discrimination in public facilities and established equal employment opportunities. Before the bill was passed, it was in a Senate filibuster for 60 working days. The national news coverage showing the treatment of protesters during non-violent demonstrations sparked national attention, which ended the filibuster and resulted in the passage of the Civil Rights Act.

About the St. Augustine 450th Commemoration

St. Augustine is America’s first city, established in 1565. It is a city built on discovery, courage and enduring spirit; it is a city built by pioneers, soldiers, artisans and entrepreneurs. Four and a half centuries later, the city and its people continue to symbolize the rich history and cultural diversity that makes St. Augustine unique. In 2014 the City of St. Augustine is commemorating the 50th anniversary of the Civil Rights Act and a lengthy African-American history. Welcome to the Nation’s Oldest City, and explore our rich history.