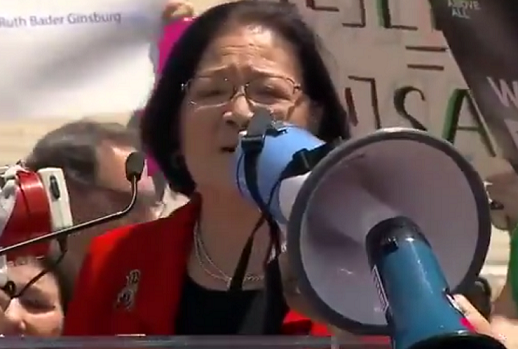 Liberals in the west have been openly campaigning to sexualize childhood and using educational institutions to further their agenda. An example of this liberal agenda was seen recently in a US Democrat Senator Mazie Hirono’s visit to a school where she advocated for abortion. Her audience – 8th graders!

Life News reported that in a pro-abortion rally, Senator Hirono told the public this:

And I asked the girls of that group of eighth-graders, “How many of you girls think the government should be telling us women, when and if we wanna have babies? And not a single one of them raised their hands.

She went on to say that she asked the boys the same question and none of them raised their hands either. Her political question aside, the point of concern here is people like her taking the liberty to roam around and preach their abortion agenda to children.

The concern here is multi-fold. First, it is not ethical to ask children (boys or girls, or both) at a school things that are sexual/activist in nature that are not part of their curriculum – even if teachers attempt so, let alone any politicians who entitles themselves to barge in anytime and use the school as a political podium.

Secondly, parental rights are violated when people not part of the school faculty take the liberty of teaching/preaching their views to kids—regardless of what party they are from. It’s just a transgression on parental rights to bring children up their way. There would be one or more parent who would not like to have their children around certain politicians (think Joe Biden) let alone lectured by them.

In the wake of Senator Hirono’s unethical and inconsiderate imposition on school children, concerned parents need to complain to schools and take measures to ensure their children do not fall prey to such uninvited attempts of indoctrination in future.

One thought on “Securing Children at Educational Facilities from Political Campaigns”