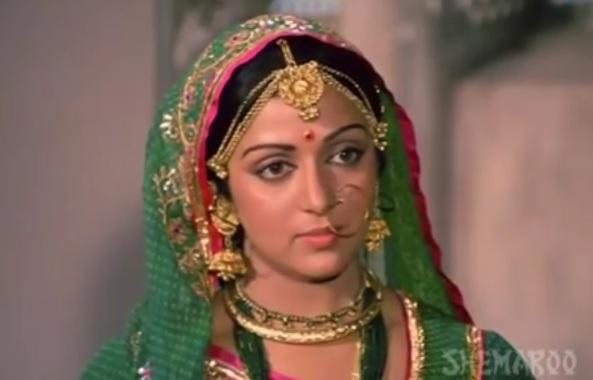 In the good old days of Hindi cinema, there were some movies (exceptions) that were not cheap rehash or copies of Hollywood and other foreign films. One such gem is Meera (1979) by Gulzar. The movie shows the life story of the eponymous heroine, a legendary poetess and mystic of Rajasthan region in the 16th Century, who adheres to spiritual principles and devotion to her Lord.

Though born into a royal family and wed into same, Meera had no interest in riches or social status or rituals. Instead she was compelled by her inner voice to serve the Lord and live in peace, teaching it and practicing it via music and poetry. Her conviction would ultimately lead to her trail and exile from the community. Bollywood’s leading actress of the time Hema Malini delivered an impeccable performance as Meera while Vinodh Khanna, another iconic actor, played her husband, Rana Bhojraj.

This clip is special in that it shows Meera standing up to the head priest (played by Om Shivpuri) to defend her refusal of cooking meat to serve to the family and guests while the slaughter has been supervised by the priest himself as per tradition. As they engage in argument, Meera reminds the priest that using a sword under the name of the Lord to attack enemies is different than using it to kill voiceless, helpless animals; she calls the latter an act of cowardice, upsetting the priest.