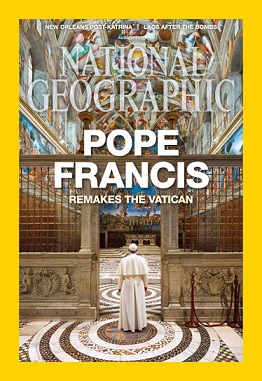 Guess who is pissed over the Pope’s cover image for National Geographic magazine? Of course, Saudi Arabia.

Foreign Policy and others are reporting the Saudi government’s ban on August 2015 issue of National Geographic that features Pope Francis on the title cover. The mag’s Arabic language Twitter mag announced that the ban was because of “cultural reasons”. What culture bans magazines, or media in general?

The culture in question is that of dictatorship – just like that in the Saudi kingdom – where the ruler imposes his/her fears, assumptions, ignorance, like, and dislike over the masses. That Christianity is hated quite openly in Saudi Arabia among its fundamentalist Muslims is known worldwide. Censorship like this offers a direct indicator of such hatred and intolerance.

And while the Saudi regime is angry at Pope Francis shown in positive light, a military-dictated Pakistani government got shivers on seeing a Bollywood film portraying a radical, pro-terror cleric in bad light. The film Phantom was thus banned in Pakistan.