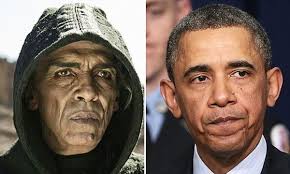 It has to be of those crazy attention-grabbers, and it’s all over the media. The character of Satan has been cut of the film Son of God due to the performer’s strong resemblance with US President Barack Obama.

As reported on The Australian, the film is an adaptation of last year’s immensely popular TV miniseries The Bible. The character of Satan in History channel’s series was performed by Moroccan actor Mohamen Mehdi Ouazanni. And at once bloggers noticed a striking similarity between his character, as seen on screen, and President Obama. A number of them started posting about the observation, placing Mr. Obama’s picture with the Satan’s character from the series.

There are mixed versions of the story accounting for the character’s removal from the film; some claiming the character was removed because of resemblance with President Obama while others giving no hint that it was so, though acknowledging the buzz about the resemblance factor. Fox News reported last year that both the channel and the creators of the series denied of any intentionality underlying the perceived resemblance between the US President and the Satan’s character in the series.