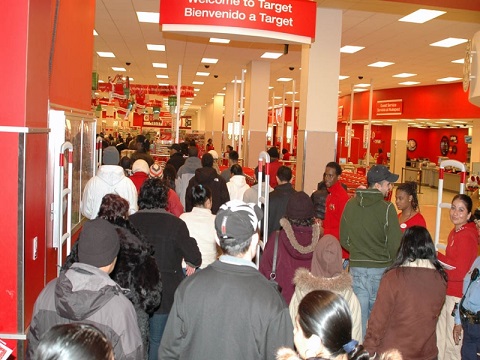 Note for readers: This article was written shortly before Thanksgiving this year.

It has become a spectacle that is repeated every year. The news covers countless stories of the madness of Black Friday, the shopping day after Thanksgiving. Black Friday is the day when retailers can look forward to a profit. This day marks the beginning of the holiday shopping season. Stores are overcrowded with shoppers who are searching for bargains.

In recent years, the stores have opened their doors on Thanksgiving day. WalMart, Target, and many malls have decided to do business on the day that was once dedicated to family meals and visitation.

According to a recent poll, six out of ten Americans oppose stores opening for business on Thanksgiving day. The reason is obvious: They feel as if the time-honored traditions that once brought families together are being stripped away in favor of profit.

The major news networks are full of stories of fights, out of control crowds, and crushes at these stores. My cousin Courtney was the victim of such an event. In 2013, WalMart advertised tablets for $50.00. Courtney wanted to buy her children one of these tablets. She and her husband went to WalMart to get their shopping done. When the tablets went on sale, a crowd rushed the palate, and Courtney and another little boy were knocked down by the crowd. WalMart security used pepper spray to control the onslaught of shoppers. We didn’t know about it until Newswest9 featured it the next evening at six P.M.

Some stores are refusing to open their doors on Thanksgiving day this year, among them are J.C. Pennies and P.C. Richards department stores. As I understand it, the heads of these stores feel that Thanksgiving should be reserved for family meals, not bargains. Bargains can wait until Friday, what will a few hours hurt?

I couldn’t agree more! I see no sense in endangering little boys and pregnant women for a few dollars in sales proceeds. I hope that other stores take the lead of J.C. Pennies. It is time for the six out of ten majority to demand a return to Thanksgiving as it once was. As I have said, what will a few hours hurt?