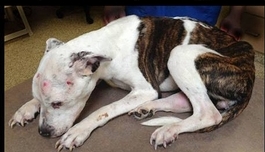 The alleged abuser of the young pit bull Puppy Doe, later euthanized due to the extensive nature of her injuries due to

torture, happens to be a Polish man who has been in US on an expired tourist visa.

Orlando writer and animal rights activist Denise Carey-Costa writes in her latest column on examiner that police arrested Radoslaw Czerkawski October 28th in Connecticut. He has been brought to Quincy, MA, and charged with 11 counts Also, forensic investigators found that Czerkawski’s house had Puppy Doe’s hair and blood.

A petition by Jayne Cvetanoski of Newcastle, Australia, demands punishment for Czerkawski, who was brought to Massachusetts. The petition letter tells that Czerkawski is from Hrubieszow, Poland, and was in the U.S. on an expired tourist visa.

The petition has received more than 22,000 signatures and needs another 2800 signatures to reach its target of 25K names.