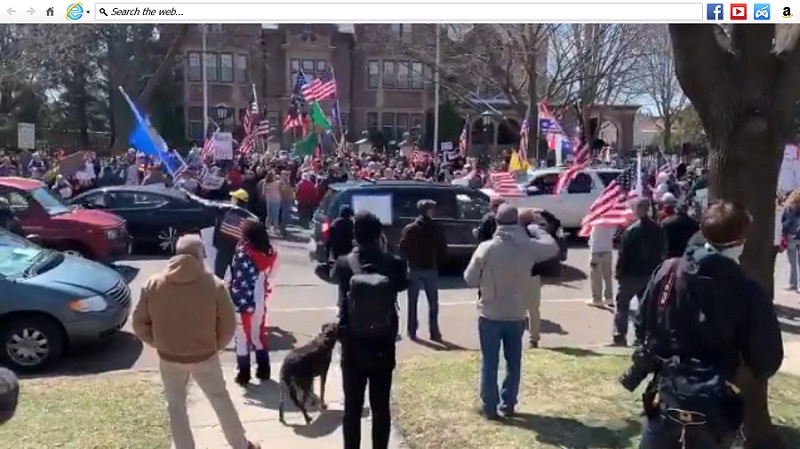 Protests are breaking out against oppressive and unnecessary lockdowns in different liberal states in the US as more and more people are waking up to the leftist political scheme of extended shutdowns and lockdowns across the country.

In Ohio, as reported on Cleveland Scene, crowds of protesters gathered outside the Ohio Statehouse in Columbus to demonstrate against the statewide shutdown as Mike DeWine’s daily COVID-19 press briefing was in progress at the venue. They were chanting slogans against shutdowns and a common one was “Open Ohio!” They also told via signs that they won’t allow their freedoms to be taken away because of someone’s fears.

The protests in Michigan are reportedly stronger both in number and intensity. The Activist Post reported that thousands of protesters in Michigan literally filled the streets to demonstrate against shutdowns and in support of opening the economy again. In addition, at least four sheriffs from different counties have refused to enforce the Governor’s stay-at-home orders in their counties.

Further north in Minnesota, another dominantly liberal state, the governor was forced to relax the Covid-19 containment measures as angry citizens came out in protest against the lockdown. Russia Today reported that protesters gathered outside the governor’s residence in St. Paul on Friday and demanded that the orders to stay home be repealed.

The protests are erupting across the US cities, particularly in liberal-controlled states that are taking away people’s liberties under the excuse of corona infection risk and plan to do for longer terms that many conservative states where the lockdowns and shutdowns are expected to end around the start of May. In some states like South Dakota, the governors have chosen to keep the state open. Interestingly their corona infection rates are far lower than the liberal states like New York with strict lockdowns.