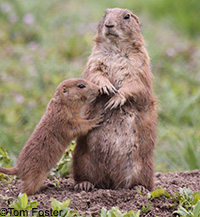 The US Forest Service is considering a plan to kill at least 18,000 prairie dogs in Wyoming’s Thunder Basin Grassland to a horrific death by poisoning them, informs Defenders of Wildlife.

In an email notification from Defenders of Wildlife, a non-profit working toward the protection of all native wild animals and plants in their natural communities, supporters were urged to join in fighting this appalling plan that puts years of dedicated conservation work under threat.

The e-message also notes that supports only have until January 3rd to urge the U.S. Forest Service to stop their “poisonous plan”.

Supporters can sign the petition Stop the Poisoning of Thousands of Prairie Dogs on Public Lands online.