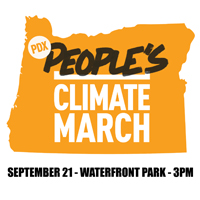 Sierra Club, September 15, 2014 – As world leaders gather in New York City for the UN Climate Summit, people are taking to the streets to send a clear message — the time to act on climate change is NOW. The PDX People’s Climate March will be one of over 1,500 events planned around the world on five continents.

Together we will march in solidarity with the NYC People’s Climate March, which promises to be the largest climate rally the world has yet seen.

The march begins at 3 p.m. at the Tom McCall Waterfront Park in downtown Portland on September 21. A rally with speakers will follow at 4:30 p.m. near the west end of the Hawthorne Bridge.

This is a peaceful, permitted event that will be a BIG moment for the climate.

A better world is within our reach: a world with an economy that works for people and the planet; a world safe from the dangers of climate change; a world with good jobs, clean air and water, and healthy communities.

Click here to RSVP to the Portland People’s Climate March and together we can send a clear message — the time to act on climate change is NOW.

The Oregon Sierra Club, along with 50 other organizations to date, is supporting this march because we know it is crucial it is for our future. We invite you, your family, and everyone you know to march side by side with thousands of other Oregonians in solidarity at the People’s Climate March in Portland on September 21.

Thank you for all you do to protect the climate!