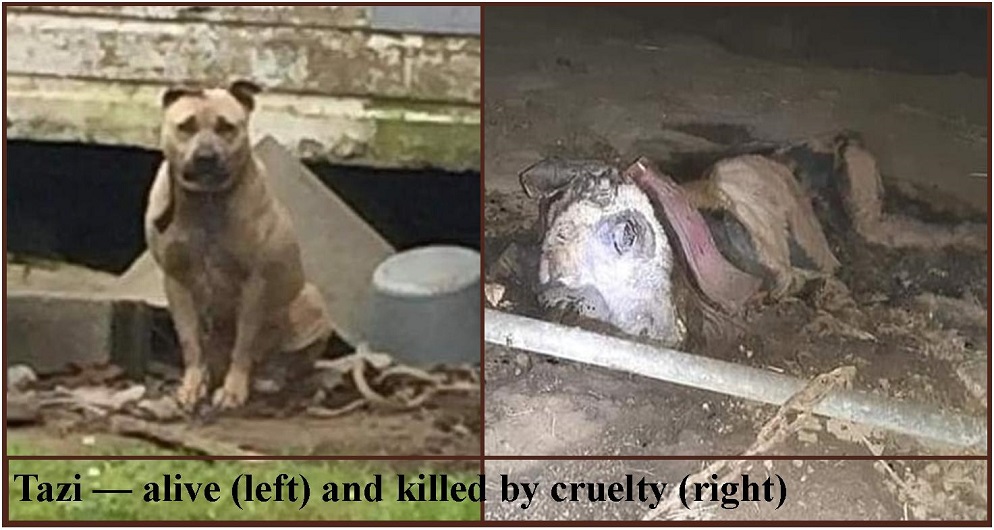 One year later, there is still no arrest in the starving death of a Mobile, Alabama dog.

Tazi, a tan pit bull suffered through the summer of 2019 on a property located at 2462 Richardson Street in Alabama. He sweltered in the heat with no food or water and died alone sometime in August/September of 2019.

Tazi’s skeletal remains were found under an empty house on the property on October 17, 2019.

Mobile Animal Control and the Mobile Police were called on several occasions to check on the dog but took no action to help Tazi. Now the dog is dead and owner Marcus E. Kyles has not been charged with animal cruelty.

In speaking to one witness who chose to remain anonymous, she contacted Mobile Animal Control on February 18, 2019 regarding a chained and abandoned dog at 2462 Richardson Street. She had not seen anyone on the property for two weeks.

Animal Control responded and noted there was a dog chained on the property, and it had shelter and water. The officer also spoke to a neighbor who advised the owner of the property; Marcus Kyles comes by and feeds the dog.

Animal Control left a note on the door asking for the homeowner to contact the shelter by 9:00 a.m. on February 21, 2019 or the dog would be removed for safekeeping.

Marcus Kyles contacted the shelter stating he was in the process of remodeling the home and kept the dog there to deter people from stealing the building supplies and items from the home. He claimed to come by in the evenings to feed the dog and would be moving back into the house when the remodeling was completed.

Animal Control came out once again in April 2019. They removed a younger dog from the property but left Tazi there. Once again, the owner, Marcus Kyles was contacted, and once again explained Tazi was left at this empty property as a guard dog.

The same witness continued to make numerous complaints to Mobile Animal Control and received written documentation of their contact with the dog’s owner. But still, the dog was left alone to suffer and starve on the property. All through the summer months, Tazi was left out in the sweltering heat with no shelter, no food, and no water. He slowly deteriorated while calls on his behalf went unanswered.

In October 2019, the strong smell of a dead animal was emanating from the property at 2462 Richardson Street. Another concerned citizen went to the property and called the police to investigate the source of the smell. Mobile Police responded and searched the empty house and yards. Another chained and emaciated dog, not Tazi, was found and removed from the property.

A few days after the first investigation, some school children reported they saw a dead dog under the house.

A report was made with Mobile Police Department’s Lieutenant Kendall Sterrett. Although there was plenty of evidence that day to charge Marcus E. Kyles with animal abuse/neglect, no known action has been taken against him by the police or animal control.

Lieutenant Sterrett stopped returning the reporter’s phone calls regarding updates on the investigation in January 2020. The director of animal control, Ellen Lurson (since then has been replaced), responded to the reporter’s email saying the case was turned over to an investigator and then stopped communicating altogether. The reporter’s texts and emails have gone unanswered by everyone since January 2020.

Immediately upon finding Tazi under the house at 2462 Richardson street, an email was sent to Mayor Stimpson of Mobile, Alabama, informing him of the failure of Animal Control in the neglect and death of Tazi. Mayor Stimpson’s office referred the email to the Mobile Chief of Police, Lawrence Battiste.

So, everyone was passing the buck saying, “not my responsibility,” and no one did anything.

Ironically, Marcus E. Kyles was arrested on 02/28/20 for driving with a suspended license, expired tag, and no insurance. Yet, he intentionally starves a dog to death but receives no charges for that crime. The priorities of the justice system are completely skewed.

A town hall meeting sponsored by the Mobile Police Department was attended by several people who spoke up for Tazi. After a panel discussion on the affects of poverty and crime on young African-Americans, they asked the panel to respond to the connection between animal cruelty and children growing up in a community where it’s common for dogs to be chained and neglected.

One of the panel members responded that the children in the community had more to worry about than how animals are treated. According to this same panelist, the neighborhood children had no empathy for a starving dog because they themselves were going hungry due to the poverty in which they lived.

When approaching the Chief of Police Lawrence Battiste about the deceased dog, he advised he was aware of the dog, but turned it over to Animal Control stating the starving of a dog is not a police matter. How can that be when the death of an animal through cruel negligence is a felony not a mere ordinance violation? He further admonished the concerned citizens for being too emotional about the situation.

There are so many glaring mistakes made in the case of Tazi’s death. First and foremost, Marcus Kyles, responsible for Tazi’s death has not been arrested or charged with the crime.

Second, the two agencies, Mobile Animal Control and the Mobile Police Department, who were contacted multiple times, did nothing to help the suffering dog. They had an owner’s name, they had witnesses, they had a location, they had complaints but chose instead to do nothing. They too are indirectly responsible for Tazi suffering and death and should also be held accountable.

Third, countless people drove past this dog,chained in the side yard, viewable from the street and multiple children walked past this yard every day on their way to school. Yet, everyone turned a blind eye to his suffering except for one or two people who spoke up on his behalf.  Unfortunately, those people mistakenly put their trust in the government agencies responsible for helping animals in distress and arresting the wrong doers.

What kind of society are we living in? Apparently not as civilized and evolved as we have been led to believe.

We are in serious trouble as a nation if the current generation and the next generation are being raised to be completely detached and apathetic to the suffering and death of a living being. And, if the agencies responsible for preventing such acts blatantly refuse to do the jobs they are tasked with. We are in desperate need of major reform and overhaul of these agencies and the antiquated way people view animals in some parts of our society.

Tazi’s death needs to be recognized for the horrific crime that it was. Death by torture and starvation is a felony in all fifty states and needs to be treated as such. Why is Marcus Kyles still walking free?

Tazi couldn’t call for help although he suffered greatly. He waited patiently day in and day out for someone to free him from his miserable existence. But no one came. Although some tried valiantly, Tazi was failed by a flawed police department, a flawed animal control, and a flawed society.

To speak for Tazi and demand that Marcus Kyles receive the adequate punishment, email Chief Battiste via his secretary at: zirlottk@cityofmobile.org. Lieutenant Kendall Sterrett who is responsible for the investigation at: kendall.sterrett@cityofmobile.org. And the mayor’s office at: mayorstimpson@cityofmobile.org

Tazi suffered through the heat, and the cold without food, without companionship, until the day that he laid down beneath the house and gave up on life. This is utterly unacceptable.

There is a petition circulating on behalf of Tazi.

And another to speak for chained dogs who suffer the same fate in Alabama,

In the words of that great leader Mahatma Ghandi:

“The greatness of a nation and its moral progress can be judged by the way its animals are treated.”