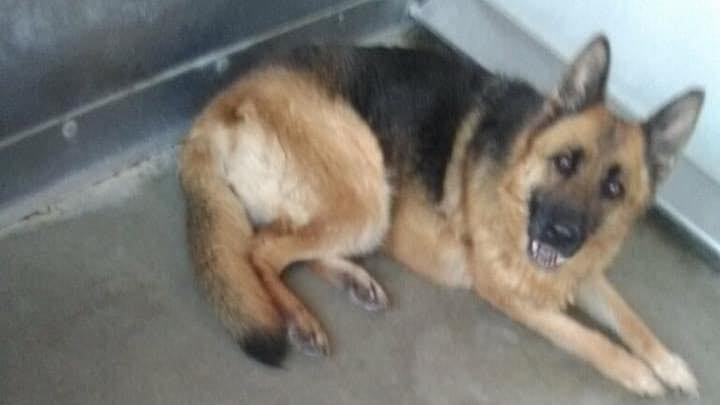 People in California and across the nation are taking a stand against the cruel treatment of a senior dog imprisoned at the Devore Shelter in San Bernardino County, California. Sheba, an eleven-year-old German Shepherd has been imprisoned for 16 months at the shelter. Her 81-year-old owner Jose “Pepe” Sanchez is heartbroken over not having Sheba home with him.

It all started when Sheba was erroneously labeled a “vicious” dog by San Bernardino County (SBC) because of a single incident with another dog. The other dog was not severely injured and doing well. The owners of the other dog agreed that Sheba should not be killed and have written a letter to SBC asking them to refrain from killing her.

Several months after that single incident, Sheba wandered from Mr. Sanchez’s property but was not involved in any trouble while away. Nonetheless, authorities confiscated Sheba and ordered that she be killed.

There was a hearing after the second outing and the Hearing Officer wrote in a letter to Pepe: “I am ordering Sheba to be destroyed per San Bernardino County Code., Title 3, Division 2, Chapter 14, Section 32.1407(a) because allowing you to maintain custody of Sheba would create a significant threat to the public health, safety and welfare.”

Yet, Sheba’s behavior was not vicious and does not warrant a death sentence.

For sixteen months, Sheba has been kept in a small concrete cell with no bed or blanket to protect her from the cold, hard floor. She has never been out of the cell since her confinement and has no toys to stimulate her and no interaction with anyone to ease her isolation. She is deprived of any exercise.

This is beyond cruel and inhumane. Even inmates in maximum security prisons are allowed time in the exercise yard and human interaction.

However, SBC claims that “Sheba is being well-cared for” …yet they are forcing her to remain in solitary confinement for 16 months without being allowed outside of her tiny cement cell.

SBC was informed at its September 15, 2020 County Supervisors’ Meeting that experts consulted at the University of California, Irvine School of Veterinarian Medicine Shelter Medicine Program found:

“That Sheba, as an 11 year old large dog is likely to be suffering from a variety of both physical and mental health issues from over 14 months of isolation and confinement in a facility that is not suited for long term confinement.”

They believe her needs should have immediate attention. Yet, SBC has refuses to act on these findings.

SBC professes that Sheba is “allowed visits by her owner three times a week” …yet these visits are limited to five minutes and the only contact is through the bars of her cage.

SBC alleges it must “protect the public from future attacks” …yet Sheba has no bite history towards humans.

There are several qualified dog rescue groups who are available and prepared to take Sheba and provide her with the rehabilitation and training she will need following the months of confinement and abuse she has been subjected to at Devore Animal Shelter.

Relocation plans to another county are also in place should that be an alternate option.

But SBC is creating such unreasonable restrictions for interested rescues that it would be impossible for them to comply with these mandates.

Sheba deserves the same consideration and benefit as other dogs that have been confiscated (for far worse reasons) and that can be pulled by a non-profit rescue for rehabilitation and rehoming.

The next court hearing is scheduled for December 11, 2020.

A “Free Sheba” rally was held in San Bernardino County on October 2, 2020.

Many dedicated members of the Free Sheba movement also spoke out at the San Bernardino County Board of Supervisors meeting on October 6, 2020.

Justice dictates that Sheba be returned to the only family she has known since she was an eight – week old puppy. Or, to a qualified rescue that can give her the proper care.

To speak for and demand justice for Sheba  call and email Matthew Marnell, Deputy Legal Counsel representing the County on Sheba’s case at 909-387-5455, mmarnell@cc.sbcounty.gov.

Ask him to stop the unrealistic demands and conditions required as part of Sheba’s release.

You can also visit the Saving Sheba website for contact info for the San Bernardino Board of Supervisors to express your concerns for Sheba. There is also an online petition and Facebook page .