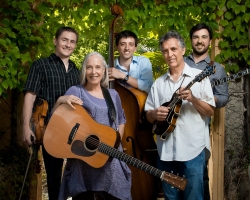 Laurie Lewis, songwriter, fiddler, & vocalist, has won accolades from many of the most respected names in the business. She has won the IBMA Female Vocalist of the Year twice. The Right Hands consists of Tom Rozum on mandolin, Chad Manning on fiddle, Andrew Conklin on bass, & Patrick Sauber on banjo. These Grammynominated artists are widely regarded as among the leading lights of modern bluegrass & pay homage to such eminent influences as Woody Guthrie, Hazel Dickens, Grandpa Jones, & the inimitable Bill Monroe.

Tom Rozum, also an accomplished fiddle, mandola, & guitar player, sings both lead & harmony with Laurie & has recorded 12 albums with her. Chad Manning has been playing fiddle since the age of 8 & has immersed himself in the styles of fiddle masters from different genres including old-time, western swing, & bluegrass. Andrew Conklin’s bass-playing combines perfect timing with a playful sensibility; his occasional solos are real gems of melodic invention and rhythmic intensity.

Patrick Sauber has been playing old-time, Cajun, and bluegrass music ever since he can remember. His introduction to performing came at the knee of his father, old-time master fiddler and claw-hammer banjo player Tom Sauber. Patrick has recorded or performed with many artists including Doc Watson, Weird Al Yankovic, & The Limeliters. The Heifer Belles open with their special blend of back porch Americana, with songs ranging from tongue-in-cheek to heartfelt to socially insightful.

Tickets for this outstanding event are $24 adv or $28 at the door.