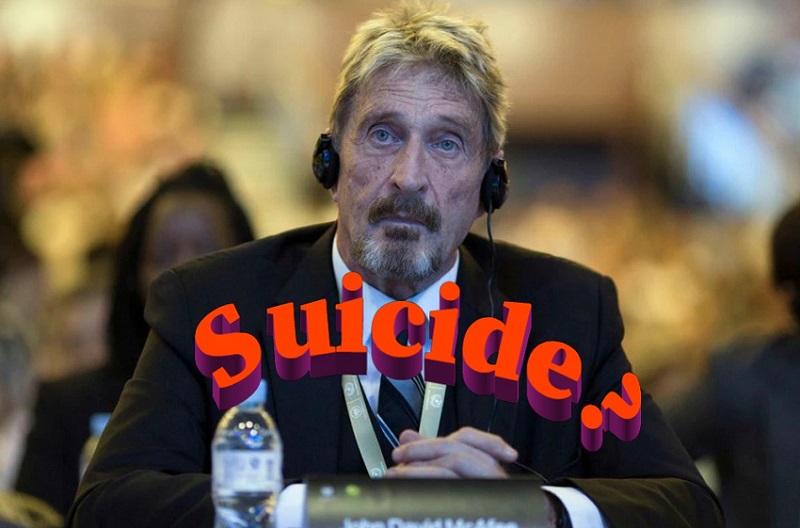 The death of famous Software tycoon John McAfee in a prison in Barcelona, Spain, is all over the media today. Suspicion surrounds his sudden death as the Spanish authorities immediately ruled out any foul play and called it a suicide. Sounds familiar?

McAfee was arrested in Spain last October at the request of the US Justice Department (DOJ) as they accused him of financial crimes, mainly non-filing of taxes, and the US authorities were trying to get him extradited to America. He was resisting the extradition because he feared political persecution in US. The court hearing his case, however, ruled today that he can be extradited to US. The New York Post reported his death.

Antivirus software tycoon John McAfee apparently hanged himself in a Spanish jail cell on Wednesday — just hours after a court ruled he would be extradited to face federal charges in the US.

The leftist mainstream media stories are leaving out the suspicious side of McAfee’s suspicious death ruled as suicide by hanging in his prison cell. But New York Post did a second story soon after the initial report of his death by alleged suicide to report what McAfee had said publicly about the possibility of him getting killed and labeled as suicide.

“Know that if I hang myself, a la Epstein, it will be no fault of mine.”

Reporting McAfee’s death, the Gateway Pundit reported that the 75-year-old entrepreneur had tweeted in November 2019 that the US government is out to kill him and he even tattooed his arm with the word “whacked” to demonstrate that he is being hunted.

“Getting subtle messages from U.S. officials saying, in effect: “We’re coming for you McAfee! We’re going to kill yourself”. I got a tattoo today just in case. If I suicide myself, I didn’t. I was whackd.

The big question is what did he know that made him the target of the deep state, the elite criminals that control the governments (in and outside the US). Rick Wiles on TruNews discussed McAfee’s death briefly and pointed to possible connection with Jeffrey Epstein and the Clintons. The video is included below.