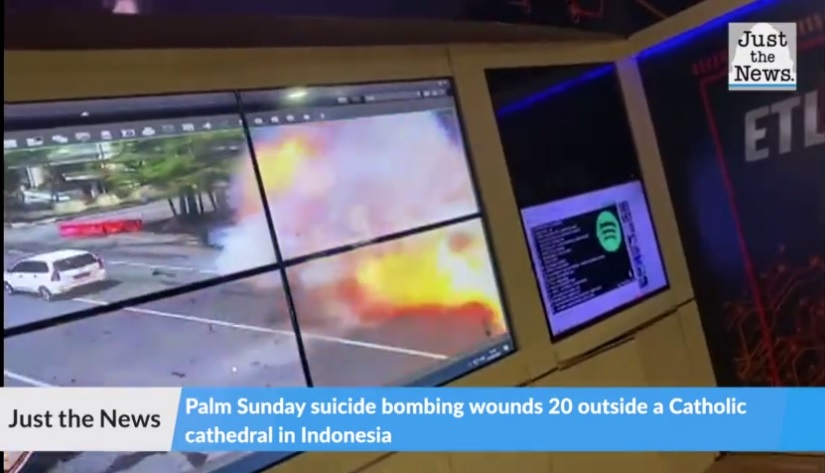 What is the big hate crime news that leftist propaganda platform Yahoo didn’t feature today on it’s homepage for all to see? It’s the latest incident of an Islamic terrorist attack on Christians – this time in Indonesia.

Two Islamic terrorists targeted a Catholic church in Makassar on Indonesia’s Sulawesi island with a suicide bombing attack. The bombing injured at least 20 people that had gathered for Palm Sunday at the church. Leftist propaganda networks reported the incident, mainly off the Associated Press story, which removed any mention of Islamic terror or terrorists and instead used the neutral word “attackers” to make the story look more Islamist-friendly.

CBN, however, added the word Islamic to the title of its story – a re-run of the Associated Press story.

The two Muslim terrorists who carried out the attack literally blew themselves up to pieces outside the church. And the local police stated that they believe the suicide members were members of Jemaah Anshorut Daulah, an ISIS-linked Islamic terrorist organization that has carried out previous terror attacks on churches in the country.

The Indonesian President was cited in the story as:

President Joko Widodo condemned Sunday’s attack and said it has nothing to do with any religion as all religions would not tolerate any kind of terrorism.

The media’s removal of the Islamic terror connection from the story speaks volumes, yet again, about their protection of Islamic terrorism and commitment to yellow journalism. The notable exception is The Fiji Times, which called the culprits “Islamist militants” in their story Indonesian church bombed by suspected Islamist militants.

No condemnations of this Islamic terror attack on Indonesian Christians has come from any international leader as an act of hate crime. And it shouldn’t be a surprise to those who know the reality of the so-called human rights advocates and the agenda of propaganda media mobs.