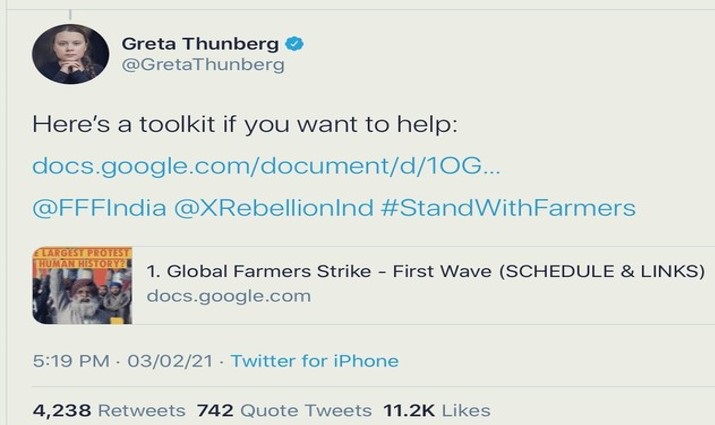 Greta Thunberg, the teenage Swedish girl used by the leftist establishment as the mouthpiece for their political propaganda, blew her cover as she accidentally shared a document in a tweet that millions noticed and saved for record.

It happened on February 3rd when Greta attempted to show her support for the farmers’ protest in India and in her naivety shared a document that seemed to be carrying instructions for her on how to support the protests in India via her social media.

On February 4th, BizPacReview posted a story about Greta’s tweet that was deleted off Twitter within an hour of its posting. Journalist Swati Goel Sharma shared a screenshot of Greta’s tweet in her story.

.@GretaThunberg (accidentally?) just shared a document on details of Jan 26 protests and upcoming online and street protests. Soon, the documented was restricted. Now the tweet has been deleted (I saved it). But incredible. pic.twitter.com/Jt4O1nLGre

The tweet and the document shared via it created a firestorm of criticism and anger in India. Numerous comments from social media users called out Greta and those using her to further their political agenda in Indian politics. People shared the “toolkit” document that was first shared in Greta’s deleted tweet to let the world see how the teen activist was a puppet of political forces pulling her strings from behind the curtains.

The anger against Greta’s involvement in Indian political protests was also seen outside social media. Sky News reported on February 4th that pro-government demonstrators in India burned photos and effigies of Greta in the capital city Delhi. The story also wrote that a case of sedition and overseas conspiracy was also filed “against the creators of the toolkit” by the Delhi police.

Indian government leader Meenakshi Lekhi called Greta “a child, a kid” who shouldn’t be despised, as reported by Times of India, but that she is to be thanked for providing them with the proof of the international conspiracy of defaming India via the farmers’ protests. Lekhi also said that nominating someone like Greta for the Nobel Peace Prize only takes away the credibility of the prize.