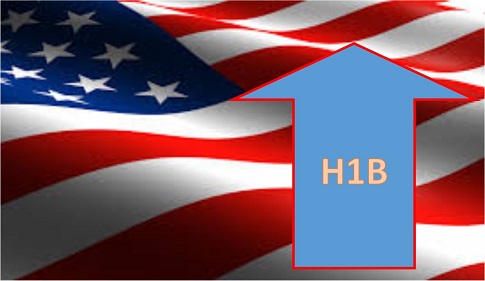 An H-1B is a visa that gives a person the right to travel to the United States for a “temporary stay”. H-1B visas are for highly skilled foreigners working in the U.S. which allows foreigners with advanced degrees to be employed; they may come in a many different forms (student visas, work visas, and tourist visas) and they expire after a period of time, (about 3 years or less).

An H-1A visa is for nurses, and was passed under the (Reform and Control Act of 1990) to help with a nationwide shortage for that field. An H-2A visa program is for seasonal agricultural workers. A revision for an intra-company transferee is known as L nonimmigrants.

This H-1B visa law was first established in 1990, when President George H.W. Bush signed the “Immigration Act of 1990”. This law was intended to help American companies deal with labor shortages in rapidly growing fields.

The Economic Growing Pains of Globalization

How it works is that each petition is submitted by a sponsoring company that pays the bill (or immigration legal fees) on behalf of the candidate it would seek to employ.

In 2016, it took less than a week for applications to exhaust the 85,000 petitions the government allows for an H-1B visas each year. U.S. tech employers claim, American universities don’t produce enough mathematicians and engineers to keep pace with an economic sector producing 150,000 new jobs each year. About two-thirds of computer and mathematical workers were born outside the U.S. and a 2015 study revealed that in 2015 around 26.3 million workers in the U.S were foreign born.

According to the U.S. Department of Homeland Security, the number of skilled visas granted by occupation in the fiscal year of 2014 that would not only include the H-1B visa applicants were 203,425 in Computer-related fields, 29,103 in Architecture and Engineering, 20,104 in Medicine, Health, and Life Sciences, 18,905 in Administration Specializations, and 44,320 listed as other.

Attempts to insure jobs are not being stolen with the United States own visa program is the reason often stated for the need for new reforms. In spite of these efforts, statistics such as the one from the Bureau of Labor Statistics show that figures in employment in the computer and information technology field is projected to grow 12% from 2014 to 2024 that is faster than any other occupation and that would total 488,500 new jobs, just inside the U.S. alone.

Any plan that would attempt to force companies to try to hire Americans first would likely need to be approved by Congress. Any new laws would probably result in a more robust restriction that targets foreign tech firms like those in India which is a $108 billion outsourcing industry. Thus, the government would most likely be required to prioritize the top foreign students who have studied in the U.S. These would include advanced degree holders, those earning a “high wage,” and those with “valuable skills”.

Provisions seemed to be in place under the old 1990 law to attempt to make sure employers are paying their workers the prevailing wage and not replacing the American worker. Yet, almost 60% of approved petitions in 2014 alone had master’s degrees or higher—making it “legal” for those workers to be paid less than an American worker they were replacing. Under the “Immigration Act of 1990” no provisions were in place to adjust the annual salary of workers that would fit under that category and at the time $60,000 U.S. dollars was the pay rate for that type of employment. No attempts to keep up with the natural raise of inflation that would occur over time were with that law.

This created a giant loophole in the law making companies paying $60,000 and above per employee, or hiring employees with master’s degrees, “exempt from this rule”. This is causing some call it, “a cheap labor program”.

The Reasons for Reform

Thus, to prevent companies from using foreign workers as a way to gain lower salaried employees, under new proposals it is possibly that wages could more than doubling the annual minimum salaries for hiring someone from oversees to $130,000 or more.

U.S. Attorney General Jeff Sessions recently said “It’s simply wrong to think that we’re in a totally open world and that any American with a job can be replaced if somebody in the world is willing to take a job for less pay.”

An H-1B visa type program will never be undone completely. According to a report by India’s software and services trade association Nasscom, Indian tech companies in the U.S. paid $22 billion in taxes from 2011 to 2015. Indian temporary workers on the H-1B and L1 visas alone contributed $3 billion in social security funds annually, even though many don’t stay long enough to benefit from it.

Any updates to this current law will take time and is not likely to be adjusted quickly, and when it is, we must remember that this will only be one of the many facets of immigration law.