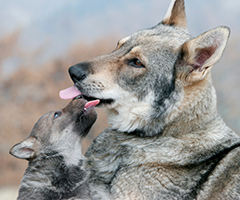 What is happening to wolves in Wyoming these days is an open, brutal example of aggression imposed on the wild by

expansionist mindset of people, supported by the authorities. But there are caring people who stand in the way of this state-sponsored brutality. Earthjustice’s legal experts are taking the case of Wyoming’s gray wolves’ defense to federal district court in Washington, D.C.

In an email notification sent on December 6, Tim Preso, Managing Attorney, Northern Rockies Office of Earthjustice, informed members and supporters of the organization that

“More than 115 wolves have been killed in Wyoming since the U.S. Fish and Wildlife Service prematurely declared victory in the wolf-recovery campaign and turned their management over to the state, which permits shoot-on-sight killing of wolves across more than 80% of Wyoming.”

Fighting the case in court needs money and Earthjustice is calling on the public to donate to save wolves in Wyoming through judicial action.

The email from Presco resents the role of state officials and the Fish and Wildlife Service in destroying Wyoming’s wolf population:

“Yet last year the Fish and Wildlife Service cut a deal under intense political pressure from Wyoming state officials, and put wolf management in the hands of that notoriously anti-wolf state.”

Earghjustice is thanking all who have contributed to and supported the cause of wolves’ protection – for being a hero to wolves and other wildlife.

Learn more about this and related issues at http://earthjustice.org/.