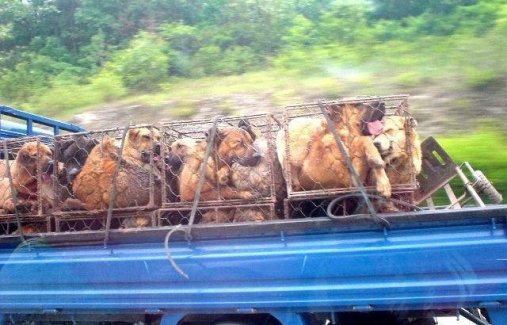 That is not to say that it’s ok to kill dogs for meat. No way! Currently, more than 60K people have signed a petition asking major companies – Coca Cola, McDonalds and others – to withdraw their sponsorship from the 2018 Winter Olympics in South Korea because the country kills dogs for meat. The heart-rending pictures of dogs in cages transported to slaughterhouses demand thought and action from people who care.

And while we should care for the safety of dogs and cats worldwide, we must not forget that in other cultures, pigs and cattle and poultry and fish get slaughtered daily by millions. They have as much a right to live and die their natural death as pets like dogs and cats. Culture is no excuse for killing, though it is practically the excuse made for killing not only animals but many people in different parts of the world (think of the honor killings in South Asia or stoning and beheading in Middle East over sexual “crimes” or blasphemies).

The second point is that in plain words, major companies don’t give a damn about ethics. They are there to make money. Animals or humans, they would weigh their priorities by the dollars not the voices that come pouring in their backyards. It’s not a bad thing to petition these companies to see their action or lack of it; however, a better strategy is to outright boycott the event that the companies are sponsoring. That means no buying tickets, no watching of it on TV or web, not reading updates on it – totally forgetting about it, even if that means losing track of your most favorite players.

Let’s hope that South Korea or the sponsors of its Olympics take some measures to stop slaughtering animals, one or other kind, and learn to value life over greed.