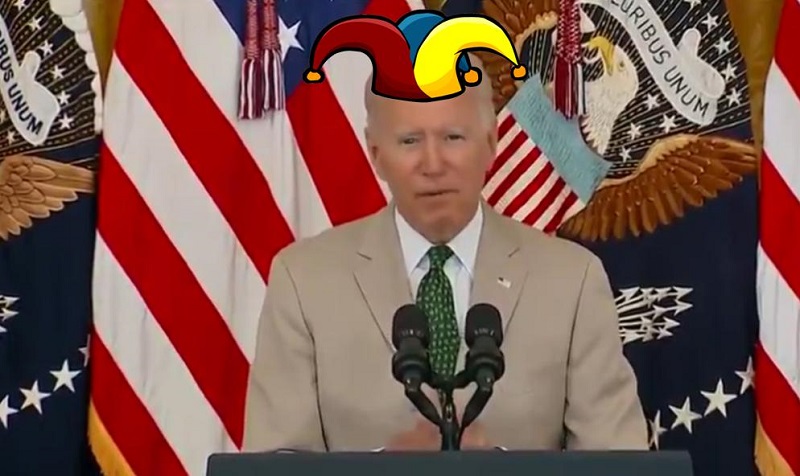 Dementia Joe had his daily exhibit of brain damage again. While doing his routine duty as the pimp of the vaccine industry, the senile pedophile said 350 million Americans have been vaccinated against COVID 19. How did that happen?

Well, it happened as it happens with the illegitimate president of America every time he opens his mouth. With obvious mental health problems that prevent him from putting together a coherent sentence, even when he tries to read from notes, Biden keeps forgetting, confusing, and revealing his senility as he tries to make up facts and figures. Today, dementia Joe made news again when he said in a speech that some 350 million Americans have been vaccinated against COVID 19. Viewers at once caught the laughable error as Biden seemed to forget that America’s entire population is around 330 million.

Videos and social media posts started making fun of Dementia Joe as he was seen making the laughable claim not once but twice while trying to advertise the vaccine that, ironically, President Trump got manufactured in record time. Biden himself got vaccinated while Trump was still officially the President, before the massively rigged election in November 2020 planted Biden in the White House.

Interestingly, the senile pedophile even looked at his notes to check the number of vaccinated people, and still spoke wrong.

People also noticed that as Dementia Joe ran away from the questions asked by media, he violated his own mask mandate and DC guidelines of wearing mask indoors.  RNC Research posted Biden’s video on Twitter, showing him walking maskless, and wrote: “Joe Biden violates his own mask mandate AGAIN.”

With a puppet president that is the laughing stock of the world, America has plunged into rapid decline with invasion of illegal aliens, soaring gas prices, and boundless corruption since January this year when the mentally gone puppet was planted in the White House.