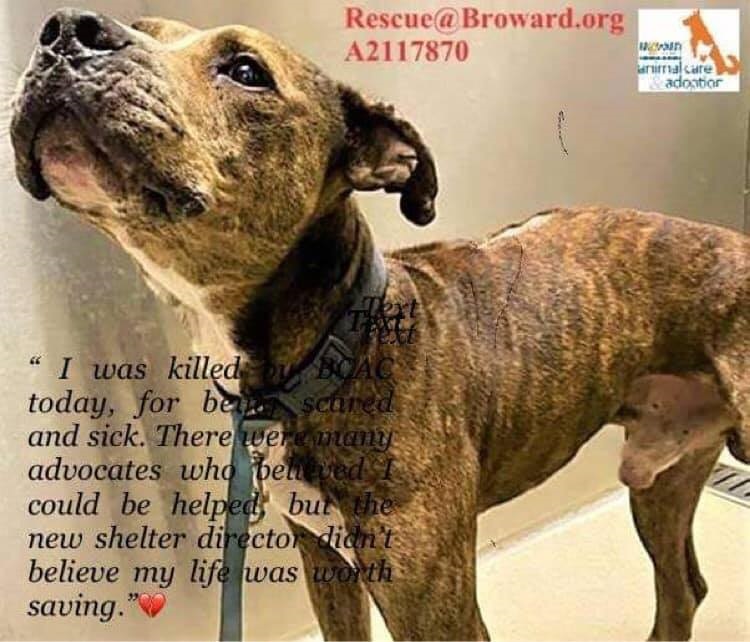 A stray dog named Trey was killed by Broward County Animal Care (BCAC) just because he was fearful. There were many offers for professional trainers to come in and assist, as well as funding by the public to help with this effort, but the shelter refused; Trey was killed on January 29, 2021.

According to information from Sloan Cowart, a Broward County resident and former volunteer at BCAC, Trey arrived at the shelter on December 30,2020.  He was in the shelter for 12 days before any bulletins were sent out to attract a rescue.  Trey was stressed and suffering from several medical conditions including scars from flea bites and heartworm.

When Sloan learned about Trey and how fearful he was, she and Kathy Brinson started a campaign to get Trey out of the shelter and into a qualified rescue.  They cross posted the dog on many Facebook pages and monetary pledges came in to help with a private trainer for his care and upkeep.

There were also several trainers/behaviorists who were willing to assess Trey.  All this information was communicated to the new shelter director Emily Wood through emails. There were many advocates working tirelessly behind the scenes to help this scared, anxious dog.

Because of Trey’s anxiety and being cage reactive, the BCAC staff feared him and refused to take him out.  So, professional trainers were hired by and paid for by the rescue community to evaluate Trey. Two behaviorists went out. The first was a private dog trainer named Logan. When he attempted to evaluate Trey, he was unsuccessful at getting the dog out of the run.

Franco Sicheri, a dog behaviorist, well known by Sloan was the next to try and evaluate Trey. When Franco arrived at the shelter, he was prohibited by kennel staff member John Vieira to enter the kennel with Trey. John stated that he was the only person allowed into the kennel but did not feel safe doing so. Unfortunately, Franco was not afforded the same opportunity as Logan to evaluate Trey.

Sadly, this was the death knell for Trey. After efforts by the community to raise enough cash to have him evaluated by professional behaviorists and not a kennel volunteer, and formulating a plan to attract a rescue to get Trey out, BCAC opted to kill Trey instead.

The community was saddened and horrified to learn that Trey was killed on Friday, January 29, 2021, despite their ongoing communication to the shelter.  This tragedy has further divided the shelter from the community.

BCAC has a very dark past. Allegations of abuse, neglect, mismanagement, and incompetence are nothing new and go back for many years to the leadership of Executive Director Thomas Adair.  He eventually resigned his position when it was discovered he and other county employees changed the dog and cat records to make it appear as if the owners wanted their pets euthanized, when instead they wanted them adopted. Evidence was uncovered that Adair was going into the county computer system altering the reason for killing the dogs and cats from health issues or aggressiveness to “owner requested.”

The next director to follow in Adair’s footsteps was director Lauralei Combs. She too was under scrutiny for the inconsistency in the dangerous dog labeling and unjust killing of dogs who were healthy and had no behavioral issues.

The newest directory, Emily Woods, has only been on the job for a week when Trey was murdered. This does not set a good first impression on how the shelter is going to continue to be run.

Inconsistency in who lives and who dies is not the only glaring flaw in the Broward County shelter system according to insiders and previous volunteers. The facility is constantly filthy. Dogs are left sitting in their own urine and feces. Instead of putting an effort into cleaning or hiring more staff to handle the pet population, dogs are now only fed once a day to prevent them from soiling their kennels. The dogs are losing weight and losing their hair; they clamor for treats because they are starving.

When the kennels are cleaned, they are sprayed down and squeegeed while the dogs are still inside. This causes much physical and emotional trauma for the animals. If they react, then they are labeled aggressive.  No wonder Trey was reactive and terrified.

It seems no matter who sits in the directorial position at Broward County Animal Care and Adoptions, the shelter continues on a downward spiral. These issues have been attributed to the shelter operating with poorly trained staff, animal behavior assessments not being handled by trained professionals, the director(s) not using the resources available in the rescue community to help eliminate overcrowding, a lack of knowledge, and leadership which trickles down to the rest of the staff.

Sloan Cowart stated they are woefully understaffed and had been promised more staffing during her tenure there as a volunteer.  All these factors combined lead to a huge increase in killing. Solutions exist, but past and present leadership have been unable to implement them. Also, to blame are the county commissioners who continue to turn a blind eye and deaf ear to the complaints filed.

Trey was just another victim in an already broken system. Imagine all the traumas and abuse he experienced to make him so fearful of humans.  His three years of misery on earth ended in a cold, dark cage killed by strangers who cared nothing for him.

Trey, like so many other dogs was failed again and again by those who were supposed to care for them. No dog is born vicious. It is the cruelty of our society that makes them that way. This was a precious life who was robbed of a chance to go on to have a happy and healthy life.

Broward County, like so many other shelters in the nation, needs to be overhauled. It is time to replace highly paid shelter supervisors, managers, and CEOs with people who care about the welfare of the animals in their care; not ones who makes excuses for killing innocent animals.

To speak for Trey and demand reform at Broward County Animal Care, please email the following:

“The greatness of a nation and its moral progress can be judged by the way its animals are treated.” -Ghandi