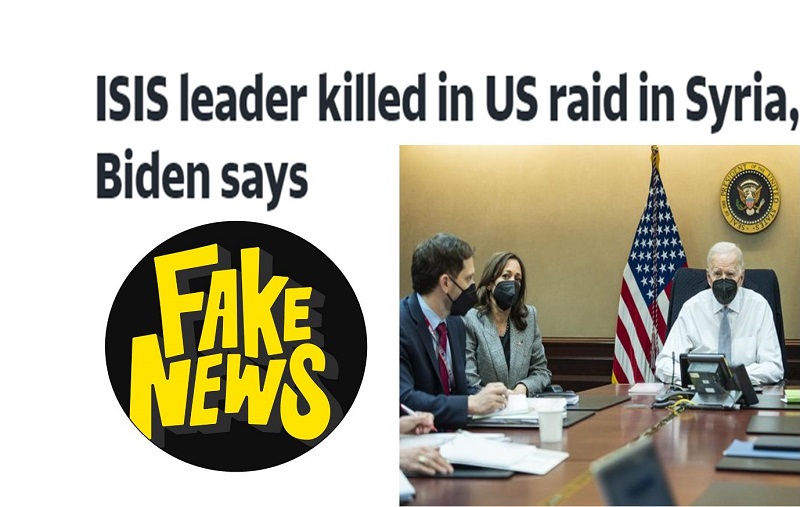 Joe Biden out of the blue claimed on Thursday, February 3, that a US military operation led to the killing of an ISIS leader in Syria. The problem with his claim is it came without any evidence, leading to the question whether Biden is lying on this one too.

Leftist news outlets echoed Biden’s claim of Abu Ibrahim al-Hashimi al-Qurayshi – ISIS leader – killing himself by suicide-bombing as US military closed in on him on Wednesday as they raided a building where he was supposedly residing with family. The Business Insider story posted to Yahoo News comes with the picture of a building with a vague caption:  “People inspect a destroyed house after the US military operation in the Syrian village of Atmeh, in Idlib province, on February 3.” “A destroyed house” and that’s all?

No evidence was offered to verify any claims made by the US military and conveyed to the public using Biden as the mouthpiece. The only other picture in the story is included in a White House tweet wherein Biden is looking into the camera and Kamala Harris and a few others are sitting by him. The picture comes with the claim that they are watching the alleged operation in Syria. But again, no evidence offered.

The story of Ibrahim al-Qurayshi’s killing is so lame that even leftist propaganda media couldn’t help ask for proof, which led to an angry and irritated reply from Biden’s spokeswoman, Jen Psaki, as reported in The World News. Psaki’s embarrassment was followed by that of State Department spokesman Ned Price, who was equally unable to offer any evidence while claiming “Russian disinformation”.

The credibility of Biden administration went down the toilet in its Afghanistan debacle in August last year when it claimed killing ISIS terrorists in a missile attack, only to be contradicted with the guilty admission of the US military that they had blown to pieces a group of innocent children trying to get to safety, and not ISIS terrorists.