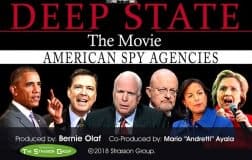 Bernie Olaf and The Strasson Group produce new film that delves into questionable behavior by top government officials during the 2016 U.S. presidential elections.

The new film American Deep State tells the story of American politics, spy agencies and biases held within the United States government, the Federal Bureau of Investigation (FBI) and the U.S. Department of Justice. Produced by Bernie Olaf and The Strasson Group, this film is expected to be released in theaters in both the U.S. and Canada, and possibly in European markets, later this summer.

This film’s plot is about secrets within the U.S. government and how a few senior officials at the FBI and Department of Justice may have acted unlawfully to help one political candidate’s campaign in 2016. The actions were based on misleading election opinion polls that at the time guaranteed Hillary Clinton the presidency. They believed there was no way she could lose to Donald J. Trump. It is believed that infighting and jockeying for key positions by these officials took place as to reserve their spot in in the cabinet of the person they thought would certainly be the next president of the United States.

“I believe that conservatives, the current president and conspiracy theorists will love this film,” Olaf stated.

This film has garnered a lot of support from Twitter and Facebook users with over 100,000 likes and follows on Facebook and thousands more on Twitter. It was this excitement from this group of fans that urged The Strasson Group and Olaf to produce this film.

“We expect the film to do very well at the box office here in the U.S and also in Canada,” Olaf stated. “The polls continue to show that the topic is still on the hearts and minds of the public and I believe it’s a story worth exploring and telling.”