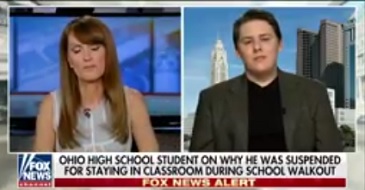 What is it going to take? A student that refused to buy into the MSM – False News.

Jacob Shoemaker, a senior at Hilliard Davidson High School in Hilliard, Ohio was suspended for using his First Amendment rights to take a stand: that he didn’t support either side of this Professionally supported walkout. He decided that he was just going to sit in class and study. Ever been the victim of trying to do the right thing(s) for the right reason(s) and getting fucked by the system that is supposed to be teaching, encouraging, helping, lifting, supporting us, and now our kids?

What is this really teaching them? Common core math? WTF? Don’t think for yourself, you are not to blame for your actions! Or is really that defending yourself isn’t part of the left’s narrative and is the first step in taking complete control, ultimately moving toward tyranny, (dictatorship, or totalitarianism)?

Or the story of the kid that took his First Amendment rights and held a pro-gun sign that said “Guns don’t kill people, people kill people” – he was forced off of school property by the school principal or risk being arrested.

There isn’t any way that this nationwide walkout was orchestrated by a grassroots high school student who throws the Heil Hitler fist at a speech, or a girl wearing a Cuban Human Rights ROFLOL (talk about guns, human rights violations… the hypocrisy runs amok).

If we were to use Hitler as a guide, we could follow what happened to Jacob Shoemaker as an example. An analogy would be a lobster and a pan of water. Put the lobster in the water and slowly turn up the heat, the lobster doesn’t know it’s being cooked until it is served vs throwing it in a boiling pot and it screams and hisses until it is boiled to death. Either way it is the same result, one you just don’t realize you’re being lead to the slaughter (today’s world of lobster/sheep).

“All propaganda has to be popular and has to accommodate itself to the comprehension of the least intelligent of those it seeks to reach.”

“How fortunate for governments that the people that administer don’t think.”

“The BEST way to take control over a people and control them is to take a little of their freedom at a time, to erode rights by a thousand tiny and almost imperceptible reductions. In this way, the people will not see those rights and freedoms being removed until past the point at which these changes cannot be reversed.”

Looking back only 80 years, if we didn’t learn anything from Hitler’s rise to power and the fallout, history is doomed to repeat itself, simply because history is being whitewashed. According to newer beliefs, the Holocaust never happened, and the civil war was all about slavery. Yes, I know that isn’t a history lesson; I just want to point out the fact that if we don’t pay attention to what has gone on before (over the last 5,000 years), we will keep repeating the same mistakes.

Most of us have had the great displeasure of going to high school, where not fitting into some semblance of a group was a crime: jocks, smokers, yuppies, nerds, or whatever there is today. Some of us learned quickly that being different was actually fun, others were on the losing end – harassed by jealous bullies just for showing up; let alone wearing the wrong shirt or hair in a ponytail. Hopefully we learned at some-point it was ok to be different.

What students can do is to embrace that feeling, that it is OK to be different, not worry about what others think or say. Look to these kids as examples, that they stood up to: the voice of the left, the radically indoctrinated and easily mislead sheep. Simply these two young men took a stand, plus the many other stories of kids refusing to walk out due to their own belief of being pro-gun: one for the 2nd Amendment, the other didn’t want politics in school – and declined to participate. Both were punished for using their given right of the 1st Amendment, but set an example to follow.