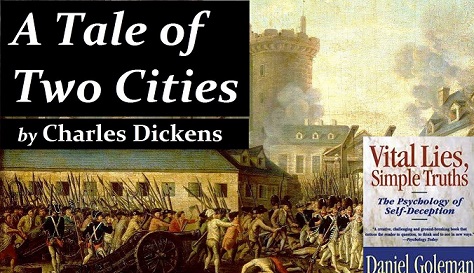 Daniel Goleman in his interesting book Vital Lies, Simple Truths: The Psychology of Self-Deception ingeniously draws the relation between repetition and skewing of attention to relieve anxiety. He quotes Freud on the topic as: “The penalty for repression is repetition.”

In the context of psychological anxiety, it implies that in times of crises, we resort to the act of repeating that which has the power to keep us engaged and thus get our minds off a highly painful experience that enters our attention frame.

This relation is actually the scientific translation of the deep behavioral insight that gifted grand masters of literature explored in their works long ago. One classic example comes from Charles Dickens in A Tale of Two Cities. In the story, set in the time of the French Revolution, Dickens not only probes into personal motivation underlying “groupthink”, or plan for a social movement, but also reveals the behavioral tools of elusion when thwarted by pain and immense suffering.

In the novel, we meet Dr. Alexandre Manette who has been kept in prison for years so that he starts making shoes, and getting used to it. The suffering of imprisonment is countered in his private world with the tool of shoemaking to the degree of dependency on the activity. After getting his freedom, he continues shoemaking and reverting to it frequently until his friend, Dr. Larry, breaks his shoemaking bench and buries his tools in the ground, all done secretly to relieve the now-free doctor of his prison lifestyle.

Mr. Manette then seems to have got on to the track of normal life when his peace is derailed by the news of Charles Darnay, his only daughter’s husband, sentenced to death by the revolutionaries. That evening, the doctor disappears, supposedly in search of some person of authority to grant his son-in-law a pardon. He returns late in the evening, exhausted, and hopelessly revealing to Mr. Larry and Sydney Carton that he has been looking for his bench and tools all the time for he has to “finish those shoes” urgently that night. In his world, shoemaking suddenly equals saving his son-in-law.

“What is to become of us if those shoes are not done tonight?” The former shoemaker’s question is so expressive of his consternation and his means of coping with it.

Causally, behind the agony of the doctor and his loyal ones are the revolutionaries like the Defarges. Madame Defarge, a middle-aged lady of iron will and determination, is shown as a key figure in the organization of the rebellions in her town. An advocate of the peasants’ rights, one who sees the nobles as “dolls and birds” who were to be plucked to pieces for fulfilling one’s revolutionary cause, her rationalization is also rooted in personal loss and injury; she has lost the lives of her brother and sister at the hands of two of the nobles. Rage and revenge now fill her and fuel her with the cause of overthrowing the rule of the tyrants.

Since we see Madame Defarge as someone suffering in her own private inferno of hatred and vengefulness, the need for self-deception is shown at work in her character as well. For most part of her role in the novel, she is seen knitting endlessly—an act of repetition indicating attention-skewing to save herself from her internal anguish.

Yet another character fitting the description of self-deception via repetition, on unconscious level, is Madame Defarge’s sister. Her account is given by Dr. Manette who had been taken to see her while she was in the custody of the nobles. The doctor tells how she would repeatedly count numbers up to twelve, in a state of trauma, even when she was unconscious—in Goleman’s terms, her brain still active to numb her pain despite shutting down the state of wakefulness.

Dickens’ observation of repetition as an element of self-deception via attention-skewing is well-depicted in A Tale of Two Cities and makes the book a predecessor of psychological insight seen in Vital Lies, Simple Truths.