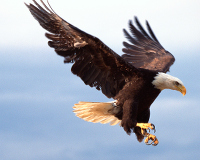 Clean and renewable energy is the cry of the day. However, achieving it shouldn’t come at the cost of wildlife. An ecological issue that recently made news is the protection of America’s eagles against wind energy industry.

National Audubon Society aims at conservation and restoration of natural ecosystems. It has started a petition on Care2 asking the US Department of Interior to reverse the decision of issuing 30-year eagle permits to wind-energy industry. The petition says that the decision to grant such permits has put Bald and Golden Eagles at risk.

Early last month American Bird Conservancy announced that it would go to court against the Department of Interior for violating federal law by deciding to grant win energy companies permits for killing eagles. Ontario Wind Resistance reported that according to American Bird Conservancy, thousands of citizens across the United States had expressed outrage at the decision to give these kill licenses to energy industry.