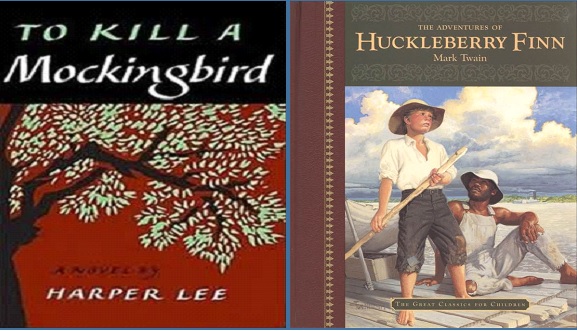 For centuries, Huckleberry Finn and To Kill a Mocking Bird have been read by millions of children around the world. They are classic adventure novels which are designed to stimulate a child’s imagination. As far as I can remember, no one ever took issue with these books. They were thought of as true classics!

Well, there is a particular school in Virginia that doesn’t think so. Recently, it was reported that the superintendent has ordered a temporary ban of these two novels from the school’s book shelves because it is believed that they include racial slurs.

Here we go again. A group of people, including parents, are telling us to be offended by something that never occurred to us because it is part of a children’s novel. We have to be more careful about what we read, what we say, and how we act. I know that there is language in both of these books that you wouldn’t want to say out loud to particular people. I understand how hurtful it can be, and I would never use it. On one hand, I am grateful that parents are thinking about morality and do not want to expose their children to inappropriate behavior and dialog. There should be more such awareness.

On the other hand, I don’t believe that the authors of Huckleberry Finn and To Kill a Mocking Bird wanted to start a race riot. I also don’t believe that they are immoral people who want to corrupt little children. When they used questionable dialog, they were simply using it in order to define the characters. Children will get to know these characters the same way they would get to know other children in real life who use this language.

I knew kids like this at Perkins School for the Blind. They used the F word, the N word, and other words that I would never say. We can’t avoid it. It happens. It is up to the readers and other children who are raised by moral parents to separate what’s appropriate and what isn’t. Killing is not appropriate, either, but many of our books describe it in detail.

I encourage the superintendent of this Virginia school district to remember his school days. I want to know if he read Huckleberry Finn and To Kill a Mocking Bird. I also want to know what the public reaction was back then. Do we really have to analyze children’s books which never harmed us, whether we are black, white, or any other race? This is a debate which will not be resolved easily.