Many times previously I have pointed to the policy of mainstream propaganda media of excluding information on the vaccination status of patients affected during a measles outbreak. But other forms of censorship are seen in these corporate media working to benefit the vaccine/pharma mafias.

I just read about the latest measles outbreak in Newport and Torfaen areas of United Kingdom. The news site South Wales Argus has been following the outbreak and repeatedly excluding the stats of patients. In their latest story, posted August 1st, the site updates on the number of measles-affected people—with two new people it’s now 12 in total in the said area.

Much like the previous stories, this one too reads more as a measles vaccine advertorial than a professional news story conveying facts relevant to the matter and its affected group. There is reminders and advice for getting the MMR shot but no mention of how many of these people who caught measles were already vaccinated. And there is no mention of the affected peopek’s ages or other attributes nor whether they are related in any way etc etc.

But then you go to see the comments on the story and you find something – or fail to do so: a comment that has been removed (hence not finding it after all). The screenshot of the comments section is included here. 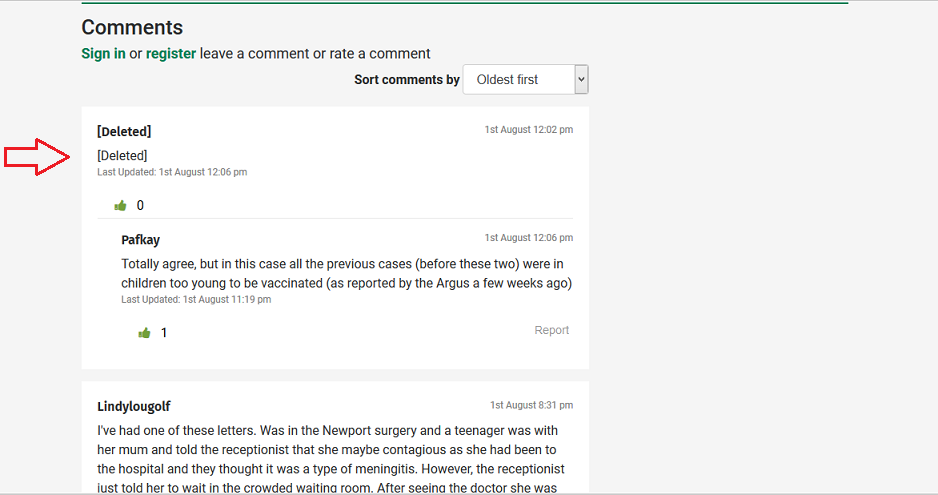 Totally agree, but in this case all the previous cases (before these two) were in children too young to be vaccinated (as reported by the Argus a few weeks ago).

So apparently the deleted comment raised the question of vaccination status. The defender, sounding like someone working with the site, tried to defend the vaccine saying it could not be given to all the previous cases reported in the outbreak as they were too young. Remembering that measles vaccine is not given to children younger than 1 year (CDC actually preaches to even not care for this if the infants are traveling internationally—putting their own claims to speculation), this runs counter to the vaccine advertorial of the site: when the vaccine is not safe/effective in such young children, who are the ones in real need of immunity, does it really work at all?

But let’s leave the 10 young cases alone. What about the two new cases—those that happened in apparently not-so-young people? The post on South Wales Argus or on bigger mainstream propaganda sources, say BBC, don’t give any information on their ages or vaccination status. Were these two new people vaccinated and still caught the infection—just like numerous other vaccine recipients who routinely catch the diseases they are supposed not to have because they got the shot?