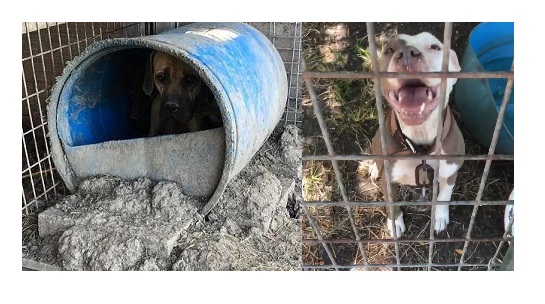 Sheriff Ricky Smith of Delta County, Texas has known about an ongoing case of animal abuse/neglect in his county yet refuses to persecute the dogs’ owner or have the dogs removed from the property.

According to animal advocates and witnesses, the abuse and neglect of multiple dogs in the Cooper area has been going on for five years with no action taken to relieve the suffering of the animals. Staunch advocate and spokesperson for the dogs, Todd Smith first learned about the dogs through a Facebook posting in December of 2019.

In January 2020, he paid a visit to the property and checked out the situation for himself and took pictures. What he witnessed were twenty-two dogs living in filthy, horrific conditions. Some dogs were in kennels with no protection from the heat or any other extreme weather conditions. Some only had a half-barrel in the kennel to serve as a shelter. Other dogs were on chains with just a half-barrel as shelter.

Half of the kennels had no water in them at all while the others had water buckets filled with green sludge. There was no food visible anywhere and no real relief from the 100-degree heat.

Todd contacted Delta County Sheriff Ricky Smith in January. The local Humane Society was sent out and gave Greer five days to improve conditions for the dogs. He complied with the order for a while, but now seven months later, the dogs are back living in the same filthy conditions.

Because the Sheriff did nothing in January to alleviate the suffering of the dogs, Todd with the aid of rescue groups, was able to save 11 of the dogs and get them off the property. This rescue mission required Walter Greer to be paid for five of the six  dogs. Todd told Walter not to get any more dogs if he cannot care for them, and he agreed.

Of the dogs rescued by Todd, two were Mastiffs which went to a foster named Jody. She described the dogs as extremely fearful and showing signs of extreme psychological damage. The two dogs stay huddled together and have been this way for seven months. However, they are not aggressive and allow people to pet them.

The owner of the dogs, Walter Greer does not live on the property as there is no source of electricity. The only source of water is multiple 150-gallon plastic drums kept on the back of Walter’s truck. By the time he gives the water to the dogs, it is overheated.

The dogs are left unattended and neglected for days at a time until Walter shows back up on the property to tend to them. Imagine the physical suffering and mental anguish these dogs  suffer, sitting in those hot cages or on chains day in and day out with no relief and little to no access to food or water. It is a torturous, cruel existence to inflict on any animal.

Todd’s friend, a real estate agent looked up the property owner, and contacted her telling her there were multiple dogs on the property in various stages of neglect. The property owner showed no concern for the dogs. Her only concern was who was walking around and checking out her property.

In a phone interview on July 18, 2020 Todd stated when Sheriff Smith visited the property several weeks ago with his personal vet, one of the dogs (a Rottweiler) was suffering from heat stress however, the vet allegedly did nothing to help the animal or remove it from the property. Sheriff Smith once again stated there was nothing illegal going on and his hands are tied.

In July there were 13 dogs and seven puppies back on the property and still Sheriff Ricky Smith refuses to act; staying true to his claim, “his hands are tied.” All he has to do is call in the help of the ASPCA or the HSUS to handle the investigation and take action, but he refuses to make the call or help in any way.

Todd approached Walter about the current number of dogs and puppies and tried to convince him to surrender the dogs to a rescue, but Walter claims they are his personal dogs and he loves them. He did, however sell the mother dog and the seven puppies to Todd along with a female dog.  .

Although kenneled, the female dog had a thick, heavy chain around her neck. Her body was covered with scars from head to toe. When on a leash, she lunged at other dogs which indicates she was possibly used in dog fighting.The female dog, now named “Peggy” is in boarding where she is being rehabilitated and learning to socialize with other dogs.

Of the seven puppies removed, one died in foster care, but the remaining six are thriving.

Todd told Walter he would come back the following weekend to get the rest of the dogs. In the interim, two other advocates/friends of Todd checked on the dogs and noticed all the dogs were gone from the property. They told Todd, and he went out there as well. When he arrived, he found only two dogs chained with no shelter.

When Todd asked what Walter did with the rest of the dogs, Walter stated he moved them to Detroit, Texas.

Not believing this story, Todd used the services of a drone to fly over the property and noted all the dogs were in a new location at the back of the property with new kennels. Once again there was either no water in some kennels or green sludge in the water buckets.Yet, Sheriff Ricky Smith stands firm on not lifting a finger to enforce the law or relieve these dogs from their suffering.

According to Texas State Statutes https://927paws.org/what-is-animal-cruelty/

Section 42.09 “Cruelty to Livestock Animals” and 42.092 “Cruelty of Non-Livestock Animals” of the Texas Penal Code prohibits a person from intentionally, knowingly or recklessly cruelly treating an animal. The following actions define cruel punishment:

Walter Greer is allegedly guilty of three of these; torturing an animal, failing to provide food, care, or shelter, and transporting or confining an animal in a cruel manner.

Since the first photos of these dogs, now known as the “Delta County Dogs” first surfaced on social media, their plight has reached thousands of people nationwide. People are enraged at the lack of action by Sheriff Ricky Smith. Although knowing of these dogs for five years and seeing hard evidence of the situation, he continues to do nothing and protects Walter Greer.

According to Todd, whenever a vet or the local humane society is going to go out there to investigate the complaints on the dogs, the Sheriff tips off Walter Greer so he can get ready and make it look like the dogs are being cared for.

This author reached out to Sheriff Smith for his statement to justify his lack of action, but he did not respond.

Is the Sheriff involved in something corrupt and outside the parameters of the law? Why does Walter have so many dogs kept confined on a property he does not even live on? How come he has so many pure-bred dogs? Why can he only sell some to Todd but not others? Are these dogs stolen?

Because of all the suspicions and public outcry, the story was covered in the Paris News .

There is a Facebook video depicting the horrible conditions the dogs are in.

Todd and thousands of people will not stop fighting for the Delta County Dogs until justice is served.

To speak up for the Delta County Dogs, contact Sheriff Ricky Smith at 903-396-2146 or email Sheriff@deltacountytx.com.