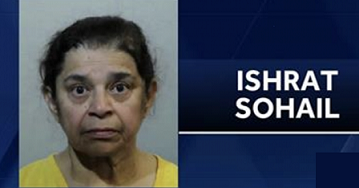 Think of vaccines and immigrants from the third world – and you can hardly not stumble on some mind of fraud that risks people’s lives. A week ago, a Pakistani doctor was arrested in Orlando, Florida for fraud in vaccination of children.

Daily Mail was one of the major news outlets that reported on the arrest of Dr. Ishrat Sohail over giving partial doses of vaccines to make more money. She practically sold vaccine received for free from government to be administered to poor children and administered it to other children who had insurance. It was theft in essence. She was arrested and her license has been suspended.

Dr. Sohail’s profile on Florida Hospital website shows that she got her medical degree from Liaquat University of Medical & Health Science, a well-known institute in Jamshoro, Sindh province in Pakistan. She was working as a pediatrician in Orlando, Florida.

The news also tells that Dr. Sohail hid important medical information—which is that two of her patients had flu but she didn’t inform them fearing it could lead to her vaccine fraud.

Another important piece of information is that it’s not the first time she has been caught in such an illegal act. In 2016, she committed a similar crime but the authorities just suspended her for two months. This gives rise to serious concerns as to why an offense of such grave nature was not punished except with a slap on the wrist.

Will her medical license be cancelled now instead of just being suspended? Or should she also be imprisoned and deported?