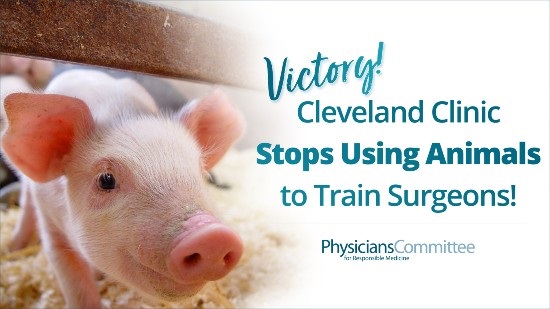 We got good news from Ohio for animal rights advocates as the academic medical center Cleveland Clinic has stopped the use of live animals in trainings for surgeons.

John J. Pippin, MD, of Physicians Committee for Responsible Medicine (PCRM) shared the news via email to subscribers. The following statement was included in the email to convey the news about the decision of Cleveland Clinic.

The Physicians Committee has learned that Cleveland Clinic has stopped using live animals to train surgeons! Previously, the hospital held up to three pig labs per year to teach invasive procedures to its general surgery residents. We thank you for your continued support, which makes victories like this possible!

He also shared the news of a similar victory for animal rights in Grand Rapids.

In another development, we recently confirmed that the joint Spectrum Health and Michigan State University surgery program in Grand Rapids has also decided to stop using animals to train its surgeons!

In yet another development announced today on the PCRM website, the Medical College of Georgia at Augusta University announced an immediate halt to the use of live animals in surgery trainings. The university’s decision follows a signed letter sent to them by a group of Georgia doctors and PCRM activism—posting three billboards urging a change. The announcement wrote that human-based medical simulators and human cadavers serve as better training material for surgery trainings.

Instead of animals, human-based medical simulators and human cadavers are widely used. The simulators, many of which AU owns, accurately replicate human anatomy and physiology and can include layers of lifelike skin, fat, and muscle.

Visit https://www.pcrm.org/ to see more of their work.