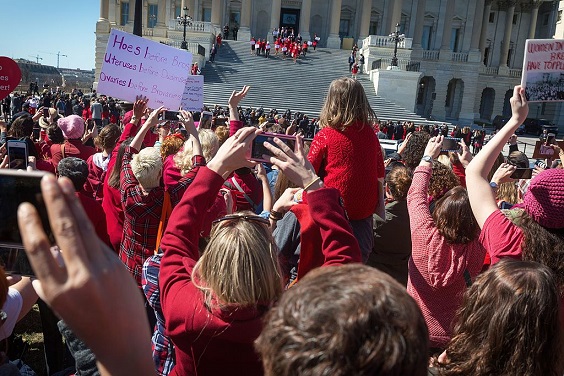 What happened yesterday under the banner of Day Without a Woman seems to have turned the spirit of activism into a comedic street show as women decided to go on a strike in dozens of countries.

March 08, 2017 was International Women’s Day. So we expected women to celebrate their achievements in personal, social, economic, and political lives. But what happened in many countries, particularly in the United States, was that feminist/liberal groups of women launched strikes, refusing to work, and actually marching against the US president Donald Trump. They gathered and marched to Trump Tower, leading to arrests of some of them.

Sadly, in many places, women’s strike disrupted the work routine and even kids were reported to ask for skipping schools for this “day without a woman” circus. Is that what feminism has come to—skipping work and making children think it’s ok to skip school? This is bad role modeling.

It’s obvious the American women’s protest on Women’s Day was a political stunt to continue the leftist propaganda going as part of the ongoing denialist psyche that kicked in on November 8th, 2016 when Hillary Clinton was decidedly defeated despite massive mainstream media propaganda and fake polls predicting her big win.

Women in America enjoy equal rights as men—in fact some thinkers believe they get more than equal rights in some matters. So what are they whining about? And if they really think such street shows will make anything better (if anything is not better already), maybe they are choosing to live in the game of delusion played with the only card they like to use—the women’s card.