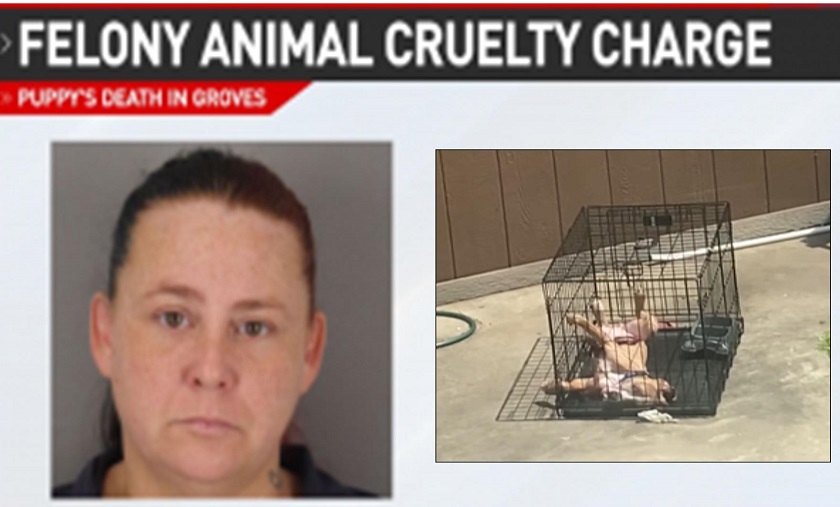 A woman in Groves, Texas, has been arrested and charged with animal cruelty after her caged puppy left out on her porch died in intense summer heat in July.

Animal Victory reported the story in mid-July when the cruelty case was first reported on July 13. A 10-year-old boy saw the distressed caged puppy left out on the porch with no shade over it and no water or food. He told his mother who went to take a look from a distance and found the puppy lying motionless.

When the authorities arrived at the scene, the dog was beyond any help. The puppy was not breathing and rigor mortis had set in. The outside temperature that day was 94 degrees.

The resident of the house first told police that she didn’t know the puppy had been dropped at her house as it belonged to her daughter who lived in Port Arthur. She was not arrested pending investigation. However, the Groves Police Department announced the arrest of Michelle Bradford on September 1st as she admitted to have forgotten about the puppy being left outside.

Beaumont Enterprise reported that Michelle Bradford was charged with a third-degree felony and taken to the Jefferson County jail where she is being held on $25,000 bond.

We are petitioning for Bradford to face the maximum sentence for her 3rd-degree felony charge of cruelty to non-livestock animals.

At the time of this writing, the petition had received 19,056 signatures against a goal of reaching 20,000 signatures. The petition can be signed online at this link.