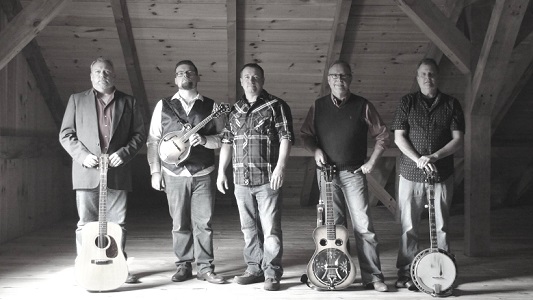 The Pinecastle recording artists Edgar Loudermilk Band featuring Jeff Autry will be touring California in January and making a stop at the Folsom Opry House before they play in concert at the CBA’s Great 48 jam in Bakersfield. The Edgar Loudermilk Band will play the Folsom Opry House, 113 Puffer Way, Folsom, 916-990-0719, on January 10 at 730 PM (door at 700 PM). The band has been playing numerous festivals, and their latest CD release Georgia Maple went to #4 on the Billboard bluegrass chart.

Nominated for IBMA Emerging Artist of the Year in 2015, the band consists of Edgar on upright bass and lead vocals, the amazing Jeff Autry on guitar, Glen Crain on dobro, and Zack Autry on mandolin. Edgar, Jeff, and Glen have been nominated as the best musicians on their respective instruments. This is the same band that was a great hit in Shingle Springs last year. Edgar has a huge voice and will be remembered as the bass player with IIIrd Time Out. He left them so he could be a lead singer, first with Dave Atkins and now leading his own band. Edgar comes from a long family tradition in bluegrass music; think Louvin Brothers. Don’t miss the opportunity to hear this fine band while they are on tour in California. Loretta’s famous pies will be served for refreshments.