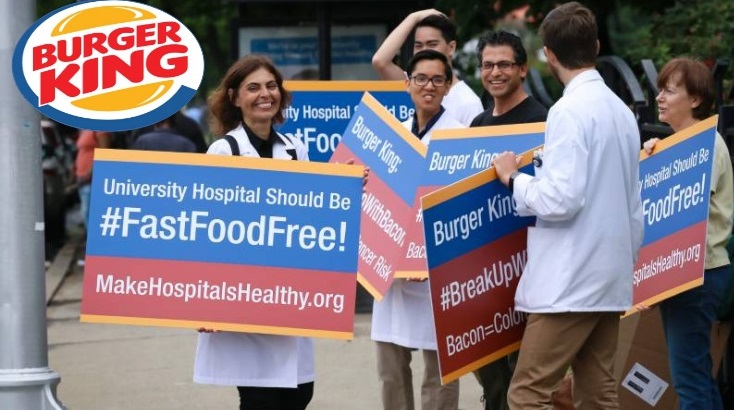 Last month, a New Jersey physician Saray Stancic, MD, led a campaign to persuade the University Hospital in Newark to remove fast food from the hospital. This led to the closing of Burger King that had served the hospital’s staff, patients, and visitors for 25 years. Is such activism for healthy food healthy itself?

The Physicians Committee for Responsible Medicine (PCRM) shared this news via its newsletter distributed via email to subscribers (which is how I learnt of it). PCRM teamed up with Dr. Stancic in this campaign on the grounds that hospitals should be free of fast food because fast food is bad for health in a number of ways. As a result of the campaign, the hospital’s authorities decided to not renew its contract with Burger King and the fast food restaurant was thus removed from the hospital.

“The departure of greasy fast food from University Hospital is a win for visitors, patients, and staff,” says Dr. Stancic, of Bergen County, New Jersey. “The hospital should provide tasty, plant-based options that can speed recovery as well as prevent and even reverse diabetes, heart disease, and high blood pressure.”

Is it really a win for all concerned?

First, being a vegetarian and a supporter of PCRM, I must say I agree with their take on the healthy food. It is not beyond debate or discussion. But in my personal opinion and by experience, I believe that plant-based food is more healthy and significantly free of health risks. When I personally buy from Burger King, I just get a vegetarian burger from them – the Impossible Whopper as they call it. I also have great respect for PCRM – for their incredible activism for prevention of cruelty to animals and advocacy for ethical testing and treatment in medicine.

That said, I disagree with their activism against fast food restaurants at hospitals. It is anti-freedom and anti-choice to use authority to remove food that we consider generally bad for health from the hospital. People need to have the freedom of choice in what they want to eat. And if they want to east unhealthy food, that is their choice. Doctors should educate people, not control their life by orders that take away their freedom of choice.

To some degree, doctors do control the diet of many of their patients. They can strongly advice the patient to stay away from certain foods, fast food for example. But should the doctors campaign to have the authorities remove all the fast food restaurants from the city they and their patients live in because it’s bad for their patients? After all, these patients can get sick from fast food once they are out of the hospital. I don’t think it’s fair to the business of those fast food sellers, to the freedom of the patient’s choice, and to the freedom of many others who are not patients but now can’t have their food of choice because the authorities banned it.

It does make sense to have concern for patients’ healthy diet while they are at the hospital. But then the visitors and the staff should not be subject to what the hospital thinks they should eat. They are not patients – not under medical supervision. What the hospital should do, if they can’t control their patients’ food choices via education and advice, is restrict the patients from ordering from Burger King, or any fast food restaurant at the hospital, but allowing staff and visitors to get fast food if they like. Those who are not patients should not be subject to doctors’ orders or diet decisions.

Burger King or fast food restaurants have the right to exist anywhere including hospitals and activism targeting them should at best demand restriction on patients’ diet not everyone who steps in or works at the hospital. Activism that takes away everyone’s choice is not healthy. It is against our basic human freedoms.