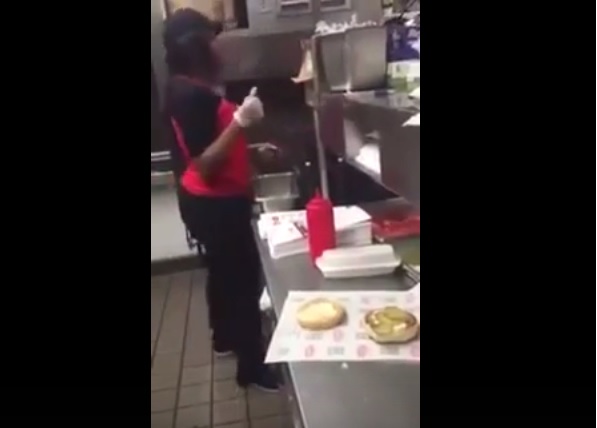 What could happen to your food in preparation when you are not looking? A lot as a new video going viral on social media shows – your food could be on and off the naked floor of the restaurant.

The less than half minute YouTube video was uploaded just a day ago and it is making rounds on social media sites as well as have led to a number of headlines in major media outlets. The video shows a Checkers employee making a burger throw a burger bun on the floor and rub it there before getting it back on the counter to add condiments to it.

Following the outrage over the “nasty” nature of the employee’s act, Checkers’ senior vice president of human resources apologized for the “shocking” incident in a video response. She told that the incident happened a few weeks ago at a Checkers near Baltimore and the burger in question was never served to a customer; that the employees there were just playing and kidding with each other.

The Checkers representative also informed that the employees in question are no longer employed by the respective franchise and that they have very strict policies regarding standards of food served to customers.

Is all good after the apology and assurance of Checkers HR person? Probably not. Firing someone, particularly someone poor, isn’t good. But given the nastiness of their act, it’s not unwarranted. However, media should have done more than just capitalizing on the shock value of the incident – as media almost always do. The investigation should have been extended to attempt to learn whether it really was an isolated incident or do such things happen more often than caught on tape.

Our lesson from the story – keep your tablet/cell phone cams on everywhere; you never know who’s playing what around you and how it might affect you.